The Shameful Way That Cruz, Trump Are Reportedly Trying to ‘Rig’ The Convention 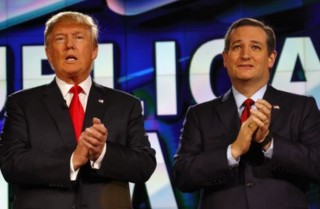 Donald Trump and Ted Cruz are bitter enemies in the Republican primary presidential contest, but one thing they appear to agree on: getting John Kasich out of the race or at least off the ballot at the Republican National Convention in Cleveland. NBC’s Ari Melber has a pretty good scoop this morning that both campaigns are working behind the scenes to ensure that the RNC’s rules only allow Cruz and Trump to appear on the ballot for the first round of voting. As Melber points out, the convention rules (which are voted on prior to when the delegates vote for a candidate), govern who appears on the ballots and thus clear the way for a candidate to win the nomination.

A ‘senior source’ at the Cruz campaign told MSNBC: “I expect the Rules Committee to require a level of support that would leave only two candidates on the ballot at the convention.”

In fact, Donald Trump hinted that something like this was being planned while at a Wisconsin restaurant over the weekend: “Kasich shouldn’t be allowed to continue, and the RNC shouldn’t allow him to continue. Kasich has more of an impact on me then Cruz,” Trump said.

Okay, so with just 143 delegates (to Trump’s 726 and Cruz’s 463), Kasich has a pretty slim shot at winning the nomination anyway. But, the fact that Trump (and Cruz’s people for that matter) are now talking about influencing the rules committee to prevent a candidate from appearing on the ballot is nothing short of hypocritical to say the least.

Just a few short months (maybe even weeks ago), Trump was worried about the ‘establishment’ pulling a fast one on him by changing the rules to keep him from winning the nomination. In fact, there was story after story written in which the Trumpsters were outraged about the dirty tricks the GOP would try to pull. So, is it fair to give Cruz or Trump a pass if they try to pull this off on John Kasich?  I’m no Kasich supporter, but something seems a little disingenuous about this one.  Let’s recall what Trump said in the past about this very subject.

“Mr. Trump’s campaign said he wouldn’t tolerate a rules change midgame” according to a January article in the Washington Times.  On March 16, Trump was concerned about riots breaking out if the rules were changed so as to prevent him from winning the nomination.  “If you disenfranchise these people and you say, well I’m sorry but you’re 100 votes short, even though the next one is 500 votes short, I think you would have problems like you’ve never seen before,” Trump said in a previous interview. In fact, over and over again Trump predicted riots if the rules were changed or voters were ‘disenfranchised’ at the Convention.

That’s why I found NBC’s article this morning very interesting, to say the least when it said:

Both campaigns are backing a rule that would require candidates to achieve a minimum amount of support to get on the ballot, which could block Kasich in Cleveland. That would effectively end his campaign.

The article goes on to quote a GOP insider that said, “(Kasich) will have no opportunity to even be voted on. The rules will be written in such a way that they can’t submit Kasich’s name for nomination.”

To be clear what the article is likely referring to is Rule 40 (b) which is a 2012 convention rule that states a candidate must win “the majority of the delegates from each of eight states or more” to have his name appear for nomination. But, as factcheck.org point out, that rule was expressly tagged as a “temporary” rule only to apply to the 2012 convention. The reason back then? GOP leaders were trying to keep Ron Paul off the ballot to ensure a united Republican front for Mitt Romney.

For decades before that, the threshold to have your name called for nomination was always a majority of 5 states or 3 states (which would give Kasich a much better though still slim shot of having his name appear on the ballot). In fact,  prior to the 1960’s, there was no threshold whatsoever to get on the ballot, according to the organization.

“Mitt Romney’s rules will not be the rules that apply to the 2016 convention,” Republican National Committee Chair Reince Priebus said during an interview over the weekend.

Last week, we learned Trump hired a veteran strategist, Paul Manafort, to help him win a presumed fight over delegates in Cleveland. Both the Cruz and Trump campaign seem geared up for an open convention. Don’t be surprised if both sides get a little dirty along the way.