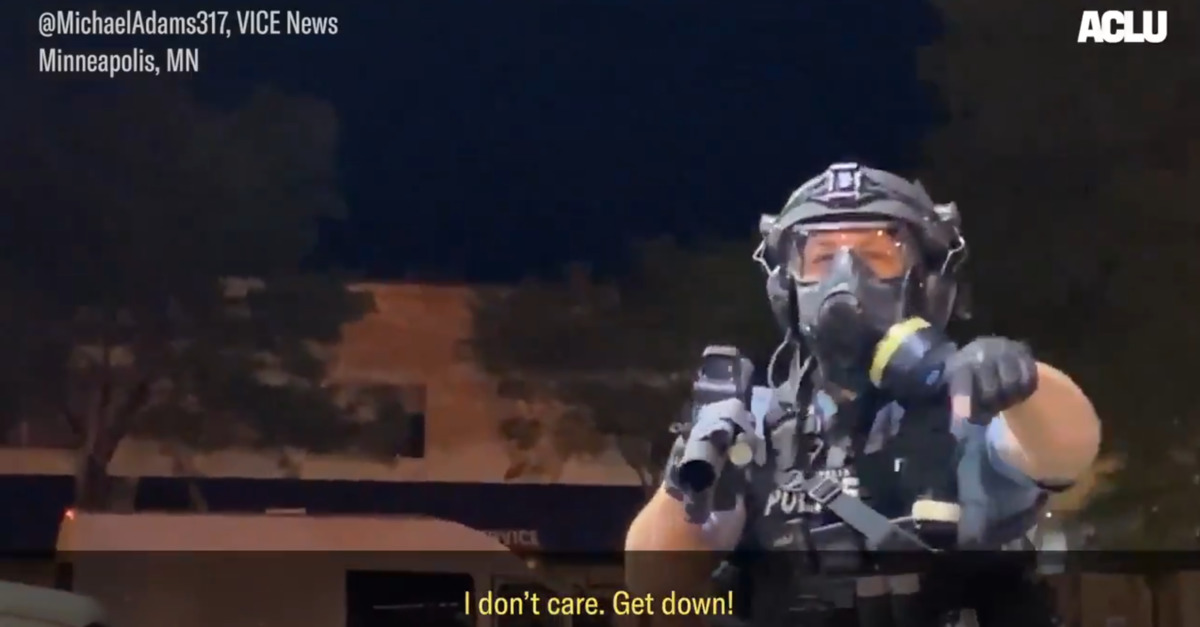 “The press is under assault in our City,” the Minnesota branch of the storied civil liberties organization notes in the lawsuit’s introduction. “Over the past week, the Minneapolis Police and the Minnesota State Patrol have tear-gassed, pepper-sprayed, shot in the face with rubber bullets, arrested without cause, and threatened journalists at gunpoint, all after these journalists identified themselves and were otherwise clearly engaged in their reporting duties.”

“These are not isolated incidents,” the filing continues. “The past week has been marked by an extraordinary escalation of unlawful force deliberately targeting reporters.”

The complaint centers around the allegation that police in Minnesota engaged in “unconstitutional actions against the press” who were covering the #BlackLivesMatter protests against Floyd’s death.

Per the 42-page filing in the U.S. District Court for Minnesota:

Even though members of the news media were expressly exempt from the Curfew Orders, Defendants ignored the exemption. Even when members of the news media clearly identified themselves, Defendants continued to target and intimidate the press by threatening, spraying chemical irritants, and firing less-lethal ballistics designed for riot control directly at members of the media. Defendants further interfered with the news media’s right to cover public events by refusing access to areas where events were unfolding and creating obstacles to reporters’ movement about the city. These incidents constitute flagrant infringements on the constitutional rights of individual reporters, as well as the public’s interest in the dissemination of accurate information and accountability of government for its actions.

The lawsuit also documents an incident during which Goyette was allegedly shot in the eye with a rubber bullet and then tear-gassed by unidentified law enforcement officers with the Minneapolis Police Department (MPD) while covering the protests on May 27.

“[Goyette] was standing 30 to 50 yards from the Third Precinct when he saw a young man who appeared to be severely injured,” the complaint said. “[Goyette] went towards the man to document the incident.”

“[Goyette] was shot in the face with less-lethal ballistic ammunition shortly after other bystanders took the injured young man from the scene,” the complaint continues. “MPD provided no warning for this use of force. [Goyette] was standing alone and there was no one else within several feet of [him].”

Due to the MPD’s alleged actions, Goyette “suffered immediate physical injury to his nose and eye and, as a result, had to leave the scene,” the lawsuit said.

The lawsuit said that Goyette had repeatedly identified himself as a member of the press prior to the incident.

The petition also documents over two dozen instances in which journalists aside Goyette were allegedly targeted for arrest, attacked with “physical force” or attacked with “chemical agents” like tear-gas and pepper spray by police.

“The State and Municipal Defendants each have a custom or policy of deploying chemical agents and injurious, less-lethal ballistics against members of the news media,” the lawsuit alleges. “For example, both chemical agents and less-lethal ballistics were fired at the news media from the roof of the Minneapolis Police Department’s Third Precinct Police Station by officers detailed to the roof during the protest. Photographs of the injuries intentionally inflicted on the news media by these shots fired from the Third Precinct roof were published in the international press.”

According to the complaint, the various law enforcement agencies included as named defendants violated journalists’ First, Fourth and Fourteenth Amendment rights to free exercise of the press, unlawful force and seizure, and due process, respectively.

“Actions like this make protesters, people trying to advocate for change, more vulnerable because journalists provide a witness and police are aware of that,” Goyette said in a statement to ABC News. “Without journalists there, police or other people in power can feel a sense of impunity that no one will see what’s happening anyway.”

Read the ACLU’s full filing below:

Goyette v. City of Minneapolis Complaint by Law&Crime on Scribd