Johnny Depp’s Friend Testifies That He Didn’t See Amber Heard with Bruises, Swelling or Make-Up Around Time of Abuse Allegations 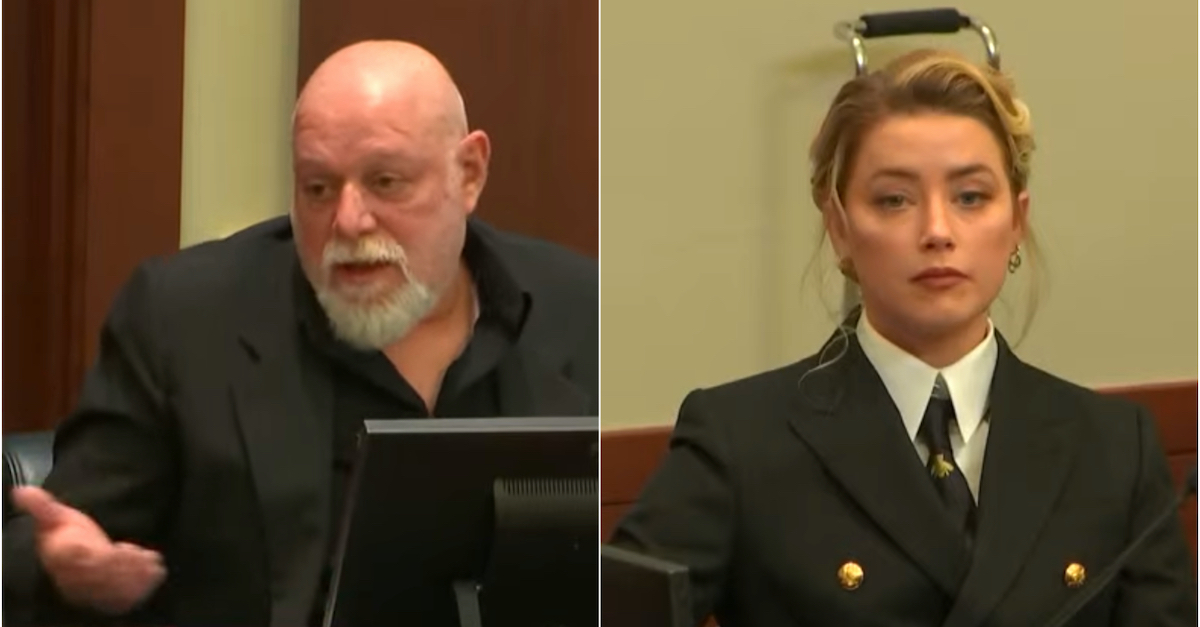 Johnny Depp’s friend Isaac Baruch testified that he never saw Amber Heard with bruises, swelling, or make-up around the time she claimed to have been physically abused.

A friend of Johnny Depp, called as the second witness at his defamation trial, told a jury on Wednesday that he never saw Depp’s ex-wife Amber Heard with bruises, swelling or noticeable make-up around the time Heard accused Depp of domestic abuse.

“As I’m walking back, I say to Amber as I’m walking up, ‘He hit you?'” recounted Isaac Baruch, who said he had known Depp since they were teenagers living in Florida. “And she goes, ‘Yeah, he threw phone at me and hit me.’ And I’m looking because I had just seen her two feet away, and I’m going, ‘Where?’ And she puts her head out. She puts a face out like that for me to look at the right side of her face.”

Depp sued Heard over a 2018 Washington Post editorial in which Heard described herself as a domestic abuse survivor. The op-ed did not mention Depp by name, but the “Pirates of the Caribbean” star’s lawyer’s argue that readers could read between the lines from Heard’s public allegations years earlier.

Depp’s childhood friend spoke at length about what he described as his visual inspection of Heard on May 22, 2016, which Baruch said was his birthday and the month Heard filed for divorce.

Baruch said that he and Heard had been standing near a doorway under the lights of the house and the sunlight outside.

After the inspection, Baruch said he cracked a joke: “Well, I don’t see anything, but maybe all beauty from one side of your face to the other side of the face is outshining everything.”

Asked on cross-examination about whether he kissed her multiple times on the cheek, Baruch bristled: “No, I’m not European. I’m from Brooklyn.”

“Is it fair to say that you’re still angry with her?” Bredehoft asked him.

At first denying the premise of the question, Baruch launched into a tirade about the “phony pictures” that he said Heard put out in the public sphere to “extort and blackmail a man.”

“Yeah, that got me pretty frustrated, confused, angry and upset,” Baruch replied.

Reversing himself later, Baruch said that, above all of those emotions, he is “tired.”

“What I want is for her to go to heal, him to go to heal,” added Baruch, making clear that, for him, this would mean Heard taking back all domestic abuse allegations against his childhood friend.

There is little sign of that occurring on Day Two of Depp and Heard’s trial pursuing and defending against dueling defamation claims and counterclaims.

Trial kicked off on Tuesday with Depp’s attorney telling jurors that witnesses would tell them about seeing Heard’s sister throw a “fake punch” at hear on surveillance footage. Baruch became the first eyewitness to make that claim, and he said that the “Aquaman” star and her sister Whitney Heard both started laughing during the pantomime.

Reenacting the pantomime on the witness stand, Baruch stood up, threw the slug and said “Pow,” softly.

When Baruch’s testimony began, he remembered the couple in happier times. Depp and Heard met in 2009, on the set of “The Rum Diary,” they started dating years later, marrying in 2015. They had all been living in penthouses of the Eastern Columbia building in downtown Los Angeles. Baruch completed large scale paintings there, for which Depp gave him $100,000.

Inside the building, Baruch said he remembered Heard as the woman with the “great teeth.” She and Depp seemed to have a “loving” relationship and “treated each other like gold.” He said he saw them two to three times a week, never saw them physically violent and observed them arguing “probably, like twice.”

That it why Baruch said he felt stunned to learn “from the internet” that Heard was filing for divorce.

Animosity between the couple no longer appears to phase Baruch, who appeared untroubled when asked whether Depp ever called Heard a “cunt.”

“To her face?” Baruch replied, quizzically.

Acknowledging that Depp called Heard that in a text, Baruch added that Depp used that word on him, too.

“Do you recall Mr. Depp ever telling you he, in base terms, hoped that Amber’s rotted corpse is decomposing in the trunk of a Honda Civic?” Bredehoft asked.

After some deflection, Baruch confirmed that Depp wrote that.

Bredehoft also pressed the witness on Depp’s generosity toward him over the years, giving him $100,000 and letting him live rent-free in penthouses for years.

“He was a nice friend,” Baruch replied, simply.

Some six years later, the scandal still bothers Baruch, who said that he has not been able to paint.

(Screenshots via the Law&Crime Network)