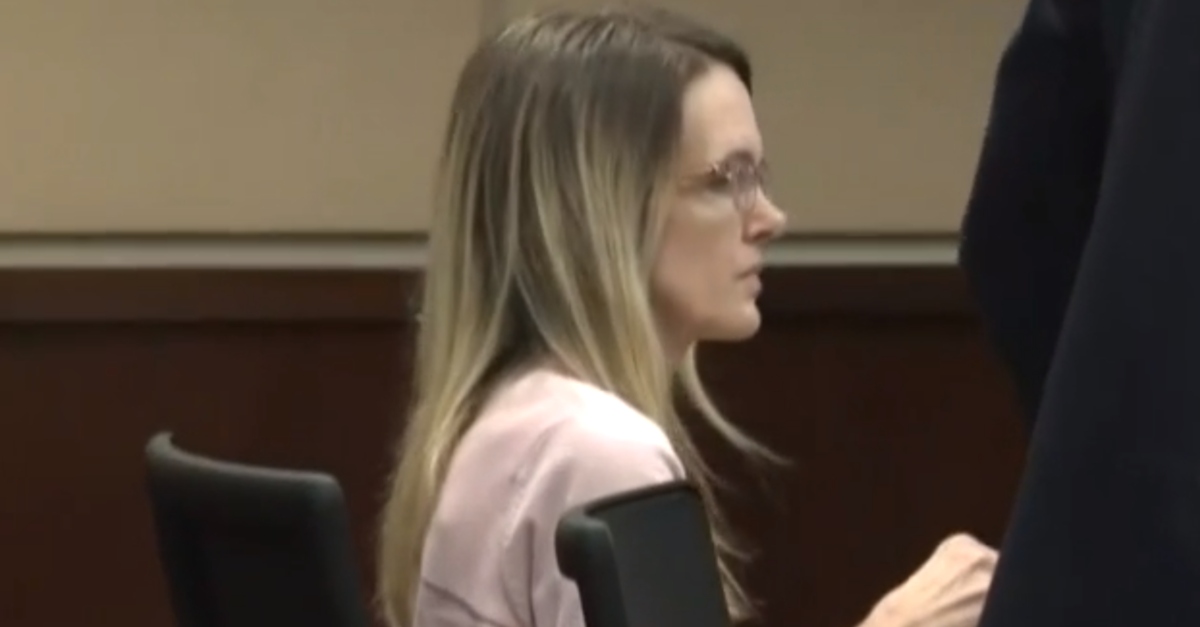 Here’s what attorneys for both sides wanted jurors to know about this high-profile case.

Jerry Michael Williams, who went by “Mike,” went on a duck hunting trip the morning of August 16, 2000, according to Assistant State Attorney Jon S. Fuchs. It was the day of his and Denise’s wedding anniversary. The plan was to go out to Lake Seminole, just northwest of Tallahassee, and return later for a trip to a hotel with his wife. He never came back.

The Florida Wildlife Commission was contacted in the afternoon. This set off a two-week search at the lake for his possible whereabouts. Investigators found his Bronco and trailer, but nothing else, Fuchs said. At least not yet. The search was scaled back after two weeks. Some believed the victim might have fallen overboard. There were theories that perhaps alligators ate him, Fuchs said. Six months later, the victim’s waders, jacket, flashlight (still functional), and hunting license were discovered at the scene, but still no body.

The prosecutor said that jurors will hear evidence that Winchester admitted to killing Mike, and burying the body by Carr Lake, north of Tallahassee.

2. The alleged motive: Denise would rather be a widow than a divorcée.

As mentioned in opening statements, Winchester reached an immunity agreement with prosecutors, and admitted that he murdered Mike at Denise’s behest (more on that later.) He claimed that he and Denise had been having an affair since 1997, three years before the murder.

By all accounts, Winchester was already close to the Williamses. He and his then-wife Kathy knew them from school, and even had children at the same time, Fuchs said. When Mike wanted to get a $1 million dollar life insurance policy, he reached out to Brian. Winchester told investigators that he set it up six months before the murder, Fuchs said.

Meanwhile, Denise allegedly looked for a way out of the marriage, according Winchester. She and Brian allegedly discussed a plan to stage a boating accident involving them, and their intended targets Kathy and Mike. The idea was that she and Brian would survive, but the other two were to die. Winchester cut that idea down. He said he didn’t want to kill his then-wife.

So instead, they went after Mike, Fuchs said.

Why not divorce? Denise didn’t want to go through with it, the prosecutor said. Having come from a religious background, she thought there was stigma in being a divorcée.

“A widow gets sympathy from the community,” Fuchs said. “Center of attention.”

Defense lawyer Philip Padovano told jurors that there’s no evidence of Denise Williams, and Winchester being together before Mike’s death. He also said that there’s no indication that his client participated in the insurance policy talks. That was all Mike, he said.

He said there’s no evidence corroborating Winchester’s version of events. Padovano mentioned that Denise and Brian only got married five years after the murder. He mentioned that in the mean time, Winchester tried to save his marriage with Kathy and urged her to stay with him even during the final divorce hearing. As for Denise, there’s evidence she started a serious relationship with a co-worker. Padovano recounted an event in which Brian allegedly crashed the new couple’s trip to Atlanta, and “threatened them both.”

The original plan was to get Mike duck hunting on December 9, 2000, Fuchs said. The victim was to fall overboard, and then water would fill his waders. This would cause him to drown. Denise allegedly got cold feet, however, and told her then-husband he couldn’t go out hunting that day.

Death was postponed only a week. The victim wanted another child with his wife, and a separate $500,000 insurance policy on him was going to expire in a few months, Fuchs said. Pressure mounted.

Finally, Mike and Winchester went on a hunting trip to Lake Seminole on December 16, Fuchs said. Brian allegedly took a separate car so it would seem like the victim went alone. He convinced him to wear waders out into the boat, and then, at around 4:00 a.m, he pushed Mike off the boat.

According to Fuchs, Brian claimed that Mike didn’t drown. Instead, the victim managed to take off the waders, and began swimming back to the boat. Winchester claimed that he then shot his friend in the face with a shotgun, killing him.

The complication blew up his alibi, Fuchs said. Brian planned on hunting with his father-in-law to establish his whereabouts, the prosecutor said. Instead, he had to drag the body to the shore, and put it in the back of his Suburban. He returned home to show that he was home with his wife. Then later that day, he got a shovel and buried Mike’s body by Carr Lake, Fuchs said, and after that, he cleaned his vehicle with bleach.

Fuchs said that Denise and Brian (now divorced from Kathy) got married in 2005, and separated at her behest in 2012. Brian tried to save the marriage, but his estranged wife refused to get back together. She filed for divorce in 2015, Padovano said

Remember that immunity agreement we mentioned earlier? Here’s how that came to be. In 2016, Winchester became so frustrated with his separation that he climbed into the back of his wife’s SUV and waited for her, Fuchs said. He confronted her with a gun, and as Padovano pointed out, he had brought along a tarp and two containers of bleach.

Brian insisted he wanted only to reconcile, the defense said. Denise was able to calm him down, and he let her go. As may be expected, Williams went to the police. They arrested Winchester for kidnapping and aggravated assault with a firearm. He faced life in prison.

Brian admitted in October 2017 that he killed Mike, Fuchs said. Authorities found the victim’s body around the same time. He still had his wedding ring, said the prosecutor.

6. Who to believe? Winchester or his ex-wife Kathy?

As mentioned before, Padovano said there’s nothing to corroborate Winchester’s story. He said there is evidence in this case that Brian had a motive to lie and make up the accusation against Denise. This admitted murderer said nothing about Williams’ alleged participation in the killing until after he faced a life sentence, the defense said. It’s at that point that he made the immunity deal, and guaranteed that prosecutors wouldn’t ask for the life sentence. Investigators couldn’t use anything he said or develop leads from his statements to go after him for Mike’s death.

Padovano described this as a “sense of revenge” against Denise, suggesting that Winchester retaliated against her for throwing him “under the bus” for the kidnapping. He insisted that there’s no credible evidence tying his client to the murder.

It remains to be seen if jurors will believe Kathy instead. She remained good friends with Denise through the years in spite of Brian leaving her, Fuchs said. According to the prosecutor, she agreed to talk to authorities. She said that she, Denise, and Brian had “sexual relations” in Panama City before Mike’s death.

In any case, she attested to an event after Brian’s arrest for kidnapping, Fuchs said. Denise allegedly asked her to relay a message to Winchester via his father Marcus: The defendant wanted to tell Brian that she never spoke to investigators. Kathy agreed to record a conversation with Denise on behalf of authorities. According to Fuchs, she said she confronted Williams about the statement, and the defendant confirmed that yes, she said that.

“Again, why make that statement unless her and Brian Winchester were involved in this all along?” Fuchs said.