No, CNN’s Jim Acosta Did Not Criminally Assault a White House Intern 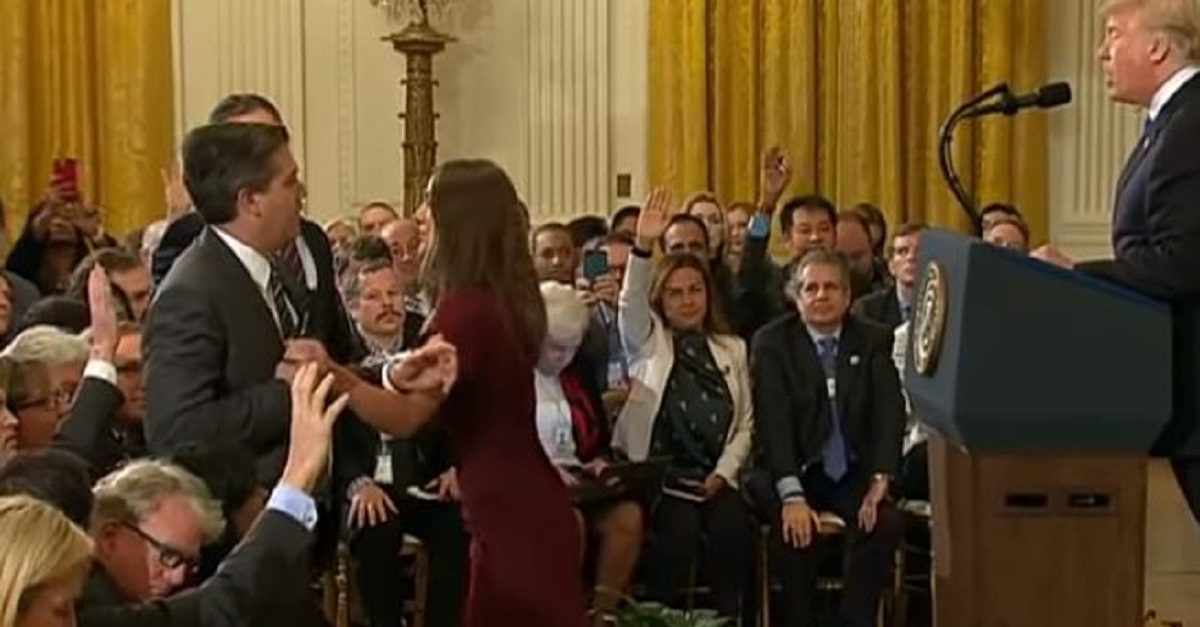 CNN’s Jim Acosta had his White House credentials suspended after he refused to give up his microphone when President Donald Trump told him he was “done.”

A White House intern moved to take the microphone away from Acosta, who could be seen on video trying to escape her grasp, bringing his arm down onto hers in the process. White House Press Secretary Sarah Huckabee Sanders said Acosta’s behavior was “inappropriate,” and the White House “will not tolerate” it.

Apparent Trump supporters on Twitter, meanwhile, think that pulling Acosta’s pass isn’t enough, and that he should face criminal charges for assaulting the intern.

Jim Acosta was rude and disruptive. And committed a minor assault against a young woman just trying to do her job.
He should be permanently banned from the White House!

Remember When Donald Trump's campaign manager stepped in front of a female protecting the president they wanted to have him charged with assault. They should charge Jim Acosta with assault and sexual harassment at this point. https://t.co/L7eYONKE2W

Taking a look at the video–regardless of which version–Acosta does seem to be out of line, but was it criminal? Probably not, given what the law says.

Since the incident took place in the White House, any criminal case would fall under federal jurisdiction. As the Department of Justice has noted, there is no definition of assault under federal criminal statutes, so the common law definition applies. Case law defines this as:

an attempt with force or violence to do a corporal injury to another; and may consist of any act tending to such corporal injury, accompanied with such circumstances as denote at the time an intention, coupled with the present ability, of using actual violence against the person.

Acosta’s actions, even if inappropriate, were not meant “to do a corporal [physical] injury to another,” and he did not appear to have the intention of using violence.

As first year law students would be quick to point out–and as the DOJ recognizes–an assault can also be committed by an act that causes “apprehension of harm whether or not the actor actually intends to inflict, or is capable of inflicting that harm.” So even if there is no injury or violent contact, there can still be an assault if someone, through an intentional act, makes someone afraid that they’re about to be harmed.

This sort of thing generally refers to acts like someone cocking their fist like they’re about to throw a punch, or charging towards someone. Acosta wasn’t even looking at the intern when he brought is arm down onto hers, seemingly to knock her hand away from him. It was not a threatening act, and the intern did not react like she was about to get hurt. She did appear to be stunned by the incident, but that was likely because she didn’t expect a professional to behave the way Acosta did, not because she felt like she was about to suffer any harm.