6 Key Details in the Dem Rebuttal Memo (Yes, They Talk About the Pee Tape) | Law & Crime

6 Key Details in the Dem Rebuttal Memo (Yes, They Talk About the Pee Tape) 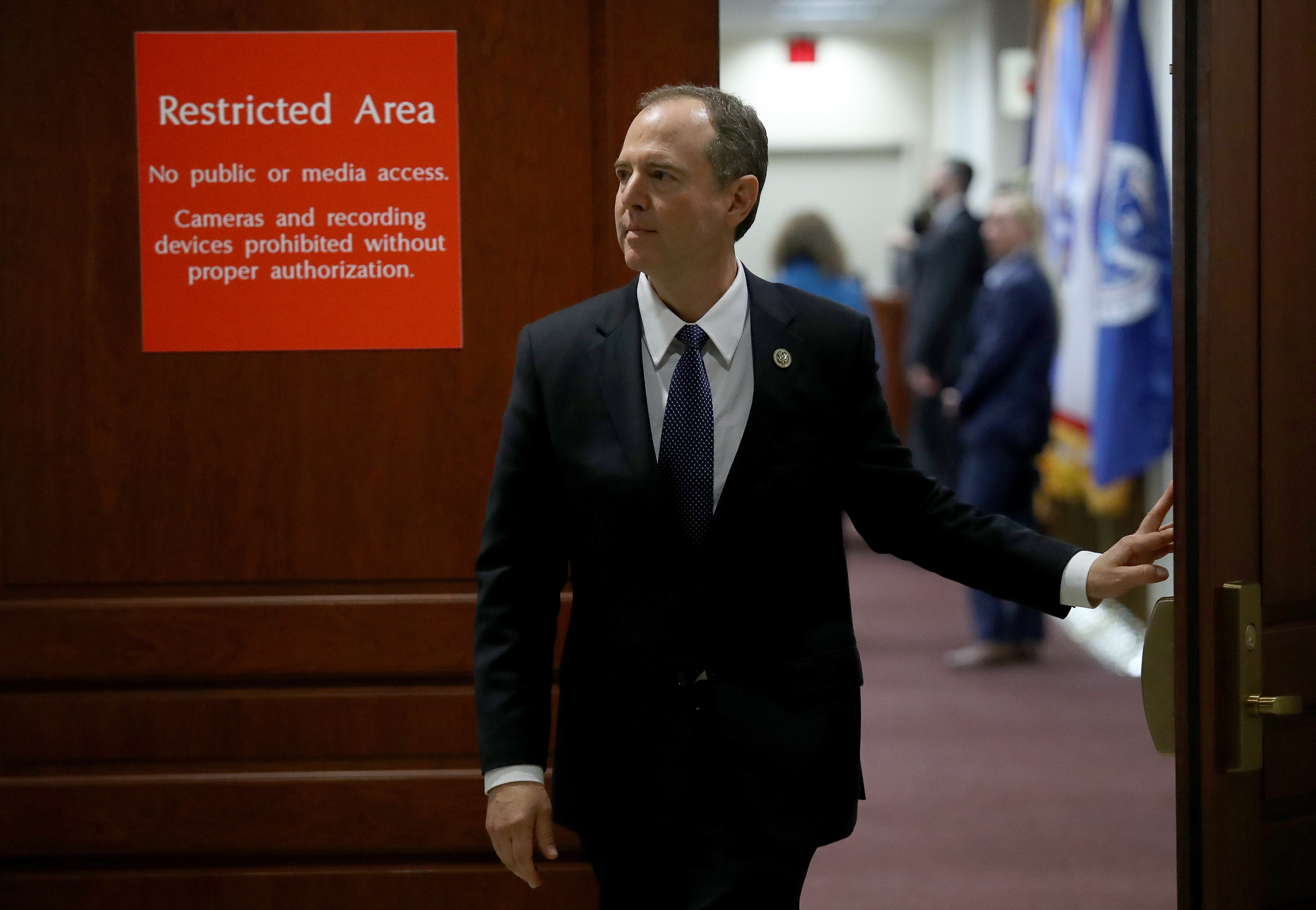 The House Permanent Select Committee on Intelligence on Saturday released the Democratic Party’s answer to the Nunes surveillance memo.

Framed as an official rebuttal to the claims in the original Nunes memo–which alleged abuses of the Foreign Intelligence Surveillance Act (“FISA”) by Obama administration officials at the expense of the Donald Trump presidential campaign–the 10-page Democratic Party memo (the “Schiff memo”) is an interesting document for a few reasons.  Here’s our top six:

The Schiff memo does a little bit of foxtrotting with the facts. As its opening salvo–and in a bid to “correct the record” (yes, Democrats actually wrote this), the Schiff memo notes:

Christopher Steele’s raw intelligence reporting did not inform the FBI’s decision to initiate its counterintelligence investigation in late July 2016. In fact, the FBI’s closely-held investigative team only received Steele’s reporting in mid-September—more than seven weeks later. The FBI—and, subsequently, the Special Counsel’s—investigation into links between the Russian government and Trump campaign associates has been based on troubling law enforcement and intelligence information unrelated to the “dossier.”

Due to the nature of this entire story, it’s almost impossible to know for sure if the above-quoted section is an accurate representation of how things unfolded viz. the U.S. government investigation into Donald Trump and Russia. But let’s assume for the sake of argument that everything quoted immediately-above is absolutely true.

The problem for the Democrats here is the Nunes memo doesn’t make the claim that the FBI decided “to initiate its counterintelligence investigation” because of the Steele dossier.

Rather, the Nunes memo asserts the Steele dossier “formed an essential part of the Carter Page FISA application,” and later backed up this claim by noting, “Furthermore, Deputy Director McCabe testified before the Committee in December 2017 that no surveillance warrant would have been sought from the FISC without the Steele dossier information.”

These are two distinct claims. The Schiff memo does not address the claim made in the Nunes memo and instead invents a broader claim on which to attack the previous memo. In other words, the Schiff memo ignores one of the Nunes memo’s major points and then creates a bogeyman to go after instead.

Not to belabor the point, but this sort of selective misdirection is exactly what Democrats chastised Republicans for when the Nunes memo was released. It’s nice to see both sides engaging in the same sort of deception.

2. The Pee Tape Makes an Appearance

This, of course, is the most important aspect of the entire Russiagate investigation–at least as far as the internet is concerned.

Under the Schiff memo’s second bullet point— pithily titled “DOJ’s October 21, 2016 FISA application and three subsequent renewals carefully outlined for the Court a multi-pronged rationale for surveilling Page”—Democrats ravage the idea that Page’s surveillance was in any way untoward or out of the ordinary under the circumstances.

The Department of Justice (“DOJ”) apparently detailed various interactions and relationships between Page, “Russian spies.” and “Russian officials” when applying for the FISA warrant. And, the Democrats claim, the DOJ “cited multiple sources” for these claims—but “made only narrow use” of Steele’s information. In service of this claim, the Schiff memo notes:

DOJ’s applications did not otherwise rely on Steele’s reporting, including any “salacious” allegations about Trump…

As much as President Trump loves to crow about the U.S. deep state (which is a real thing but not in the way the MAGA set imagines and which probably isn’t too concerned with anything Trump has done or plans on doing), he sure is more or less okay with their methodology used to keep Americans in the dark about the activities of generally unaccountable, effectually unsupervised and oftentimes unlawful U.S. intelligence agencies.

Many of the Schiff memo’s major points are almost completely inscrutable because of the White House’s signed-off on redactions.

For example, one section purports to show that the DOJ provided info to the FISA Court that actually corroborated the Steele dossier’s information about Carter Page. The section is titled, “In subsequent FISA renewals, DOJ provided additional information obtained through multiple independent sources that corroborated Steele’s reporting.”

This is important and potentially exciting information. Too bad it’s basically blacked out entirely. The only information surviving the censors’ pen–the FBI here–is something nonsensical about Page, Moscow and meetings with Russian officials. In other words, this would probably be the major source of news contained in the Schiff memo–but no one can read anything about it because, well, ask the sanctified “career professionals” at the FBI.

Additional redactions render additional points almost nonexistent as well. The section titled “The Court-approved surveillance of Page allowed FBI to collect valuable intelligence” is likely tantalizing to Russki spy vs. spy aficionados, but it’s so blacked out that the section reads like a bad attempt at a joke.

Much of the Schiff memo reads like “The Life and Times of Carter Page.” There’s good reason, too. The details are interesting, to say the least, and serve the Democrats in their efforts to paint the FISA Court warrant on Page as SOP.

To wit, Page lived in Moscow from 2004 to 2007. He pursued business deals with Russia’s state-owned energy company.

Page was apparently targeted for recruitment by “a Russian intelligence officer” during this time. The sentence after that in the Schiff memo would have likely explained how Page reacted to this personalized recruitment drive—but that sentence is heavily redacted and only reads, “Page showed,” before being blacked out.

We can assume Page wasn’t actually recruited though. Because another section is titled, “Page remained on the radar of Russian intelligence and the FBI.” This section notes that in 2013, the FBI indicted three Russian spies—“two of whom targeted Page” for the aforementioned recruitment.

Much of this Page backstory is already public knowledge but is apparently being provided in service of the broader point that the FBI’s had their eyes on Page prior to his involvement with Trump—and certainly prior to the Steele dossier.

The Schiff memo performs another somewhat interesting series of dance moves. While simultaneously rubbishing the idea that the FBI and DOJ would have relied on the Steel dossier for any important or foundational information, the Schiff memo goes out of its way to…promote the intelligence contained in the Steele dossier.

In one section on Carter Page, the Schiff memo cites to the Steele dossier’s claim that Page “met separately” with two men: Igor Sechin and Igor Divyekin, a Russian mineral resource oligarch, and a Putin-linked Kremlin official, respectively. Per the Schiff dossier and its newest, biggest fan, the Schiff memo, Page apparently met with both men to discuss lifting sanctions and the possibility of getting Clinton-centric kompromat “released” to Trump’s campaign.

To say nothing of Page’s credibility on–or the overall factual nature of the point–this is extremely old news that Page has vehemently denied in some form or another on various occasions. The Schiff memo treats this dossier-sourced information as gospel. Again, while insisting that the Steele dossier itself wasn’t really that important.

Journalist Marcy Wheeler noted this semi-bombshell contained in the Schiff memo. The following description of what Papadopoulos said is severely redacted but apparently refers to Joseph Mifsud, the professor who told Papadopoulos about Russia’s email cache:

George Papadopoulos revealed [redacted] that individuals linked to Russia, who took interest in Papadopoulos as a Trump campaign foreign policy adviser, informed him in late April 2016 that Russia [two lines redacted]. Papadopoulos’s disclosure, moreover, occurred against the backdrop of Russia’s aggressive covert campaign to influence our elections, which the FBI was already monitoring. We would later learn in Papadopoulos’s plea that the information the Russians could assist by anonymously releasing were thousands of Hillary Clinton emails.

But, Wheeler notes, “[T]hat Mifsud told Papadopoulos that the Russians were thinking of releasing it to help Trump is news, important news. It means the discussions of setting up increasingly senior levels of meetings between Russia and the Trump campaign took place against the offer of help in the form of released kompromat. Which, particularly given the evidence that Papadopoulos shared that information with the campaign, makes the June 9 [Trump Tower] meeting still more damning.”

Colin Kalmbacher is an attorney from Texas. He obtained his J.D. at the Texas A&M University School of Law in Fort Worth before receiving an LL.M. in International Law and Intellectual Property from Benjamin N. Cardozo School of Law in Manhattan. Follow him on Twitter: @colinkalmbacher

Editor’s note: this article was amended to include additional information after initial publication.