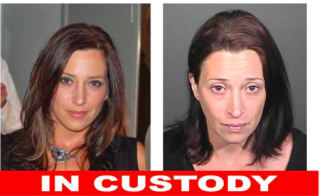 The Los Angeles Sheriff’s Department arrested Maria Christina Johnson who they say conned high-rollers and used them to fund her life of luxury. Johnson also went by the fake names Maria Hendricks, Gia Hendricks, Maria Christina Gia, or Maria Hainka, and investigators says she has been committing fraud since 1997.

The Sheriff’s office detailed on Facebook the alleged scheme:

” ..it was determined Suspect Johnson’s mode of operation was to capitalize on her physical attraction and meet victims through well-known dating websites and home rental websites. Once Suspect Johnson gained access to a victim’s home, she located their personal identifying information and opened lines of credit without their permission. She would change their mailing address and assume the victim’s identity. Once she gleaned information about the victim’s personal connections, she moved on to steal the identities of their relatives and friends. “

Johnson was ultimately arrested after members of the task force found out she was staying at a high-end hotel in Santa Barbara County where she allegedly charged more than $100,000 in expenses. Investigators report that she is originally from the Washington state area, and listed her occupation as a “dog trainer.” She is currently in jail facing felony charges with a $2 million bond.