WikiLeaks Just Illegaly Posted PDF to Fire and Fury, Anyone Who Downloads Could Face Huge Fine 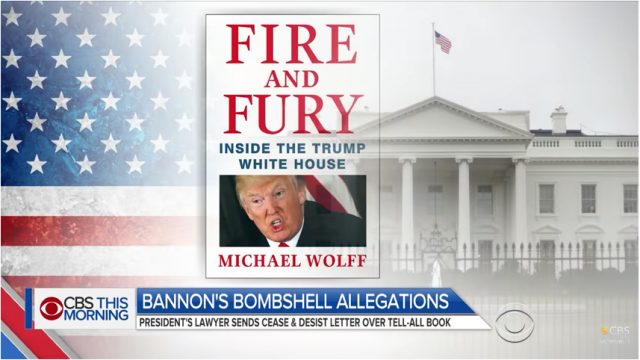 For those not wanting to pay the $18 for a hardcover version of Michael Wolff‘s new book Fire and Fury: Inside the Trump White House, or the $14 dollars for the Kindle version, don’t be tempted by WikiLeaks’ tweet with the full PDF version of the book. Law&Crime consulted several copyright legal experts who all agree that the tweet amounts to copyright infringement, and anyone who downloads the book could be held liable too.

Here’s a screenshot of the tweet. Seriously, don’t click on the link to the PDF if you ever come across it. 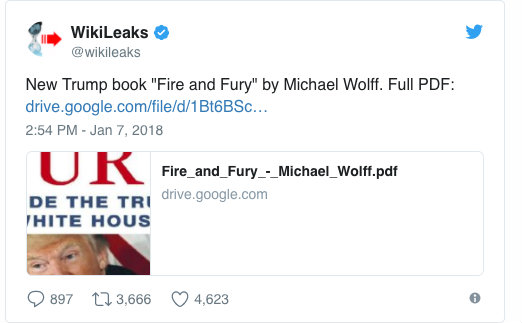 Fire and Fury has made headlines for several days now as details have come out to the media about the book’s contents. It was released to the public on Friday. The book gives an (unflattering) inside glimpse into the inner workings of President Donald Trump and his White House, including insulting comments made by former Trump campaign manager and advisor Steve Bannon. Trump sent a cease and desist letter last week in an attempt to stop publication of the book. WikiLeaks tweeted out their own version of the book late Sunday afternoon.

“There’s no question that this is copyright infringement,” University at Buffalo School of Law Professor Mark Bartholomew explained to Law&Crime. “Sometimes you can make an argument that alternative uses of an author’s work amount to ‘fair use.’ But no fair use defense would apply here. WikiLeaks is offering a link to the entire book and in a way that absolutely harms the economic interests of the publisher and author. Very rarely, copyright considers if there is a separate First Amendment/free speech interest that should override the intellectual property interest of the author.  But it’s hard to see a First Amendment argument here to support WikiLeaks. Although Wolff’s book about president Trump is undoubtedly a matter of public concern, the public is not being blocked from having access to this information. They can pay the publisher for the book, and they also have access to excerpts from the book that are being circulated to the press.”

By the way, that means you could also get in trouble if you download the book from WikiLeaks’ tweet.

“If someone downloads it, they are making another unauthorized reproduction, which is a violation,” NYU School of Law Professor Christopher Sprigman explained in an email to Law&Crime. “The damages could be up to $150,000 (this is the maximum statutory damage for willful infringement per work), plus attorneys fees.”

Yikes. No word if yet if Wolff will be pursuing legal action against WikiLeaks. If we hear anything else, we will update this link accordingly.