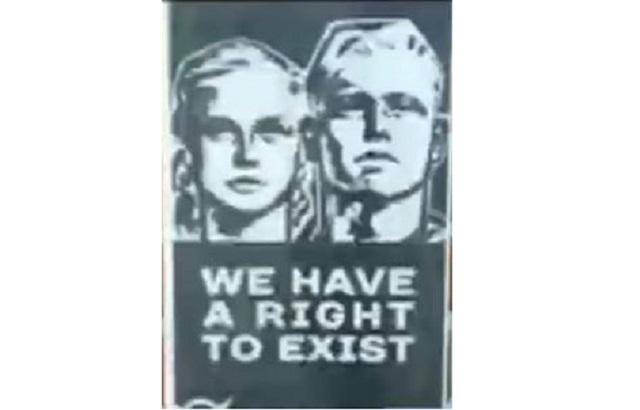 The campus community at George Washington University was stunned when they found flyers all over school grounds promoting white nationalism. Signs, including one that called for turning in undocumented immigrants to authorities, with the message, “THEY ARE CRIMINALS. AMERICA IS A WHITE NATION.” Now the school is looking to take action, The Washington Post reported.

“We are in the process of removing them,” school spokeswoman Candace Smith said about the flyers, adding that they were posted without authorization. “GW Police are investigating to determine the identity of those who have defaced our property.  The language used in the fliers is offensive and is counter to our values as an open and inclusive community.”

But one member of the school community think this goes too far. GW Law Professor John Banzhaf said in a statement obtained by LawNewz.com, “There is nothing unlawful about urging students to report suspected violations of law, whether those laws relate to immigration, rape, or mischief.” While Prof. Banzhaf was not endorsing the messages on the flyers, he noted that seeking a criminal investigation went against ideals of free speech.

“Even assuming that white power messages … constitute hate speech, even hate speech is protected by the First Amendment, by the University’s own statement of students’ rights, and by any conventional definition and understanding of academic freedom” Banzhaf said.

But even though people may have the freedom to spread controversial messages, the nature of the words have caused concern. “I cannot believe this is taking place today in the U.S., let alone on a college campus in a liberal city like D.C.,” said Corey Garelick, a law student at GW. He added that other students are scared by the fact that these signs are popping up in their community.

The organization taking credit for the posters appears to be full-fledged neo-Nazis, telling the Post that they “hope to raise awareness amongst college students regarding the problems facing the world today, and to advocate for a National Socialist solution to these problems.”

GW isn’t the only school where these signs have appeared in recent months. According to the Anti-Defamation League, white nationalist groups have been behind more than 100 incidents at colleges this school year, with most of the acts occurring since January.