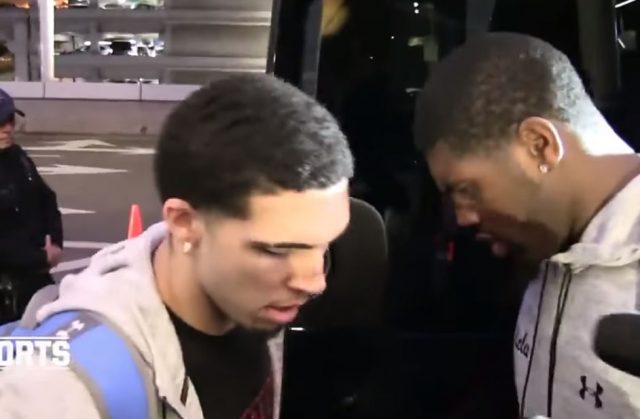 LOS ANGELES (AP) — Three UCLA basketball players detained in China on suspicion of shoplifting returned home, where they may be disciplined by the school as a result of the international scandal.

Freshmen LiAngelo Ball, Jalen Hill and Cody Riley arrived at Los Angeles International Airport late Tuesday afternoon after a 12-hour flight from Shanghai. They ignored reporters’ shouted questions while making their way through a horde of media outside and getting into a van that took off from the departure level.

Pac-12 Commissioner Larry Scott said the matter “has been resolved to the satisfaction of the Chinese authorities.”

The players were detained in Hangzhou for questioning following allegations of shoplifting last week before the 23rd-ranked Bruins beat Georgia Tech in their season-opening game in Shanghai as part of the Pac-12 China game. The rest of the UCLA team returned home last Saturday.

A person with knowledge of the Pac-12’s decision said any discipline involving the trio would be up to UCLA. The person spoke to The Associated Press on condition of anonymity because the conference doesn’t plan any sanctions.

“I want to be clear that we take seriously any violations of the law,” he said in a statement. “In this particular case, both Athletics and the Office of Student Conduct will review this incident and guide any action with respect to the involved students. Such proceedings are confidential, which limits the specific information that can be shared.”

There was no immediate word on the trio’s status for the team’s home opener Wednesday night against Central Arkansas.

The school said the three players, along with coach Steve Alford and athletic director Dan Guerrero, will make their first public comments about the matter at a campus news conference Wednesday, but won’t take questions.

Scott thanked President Donald Trump, the White House and the State Department for their efforts in resolving what he called “the incident with authorities in Hangzhou, China.” He indicated that UCLA made “significant efforts” on behalf of its athletes.

It wasn’t clear under what terms the players were freed to return to the U.S.

“We are all very pleased that these young men have been allowed to return home to their families and university,” Scott said.

Trump said Tuesday he had a long conversation about the three players’ status with Chinese counterpart Xi Jinping.

Ball, Hill and Riley were expected to have an immediate impact as part of UCLA’s highly touted recruiting class. Instead, they are being talked about solely for their actions off the court.

Ball, a guard whose brother Lonzo is a rookie for the Los Angeles Lakers, averaged 33.8 points as a high school senior. The elder Ball played one season in Westwood and left early for the NBA draft.

The Balls’ outspoken father, LaVar, was in China at the time of the incident. He spent some time promoting the family’s Big Baller Brand of athletic shoes with his youngest son, LaMelo, while his middle son was detained.

The Bruins traveled to China as part of the Pac-12’s global initiative that seeks to popularize the league’s athletic programs and universities overseas. The China Game is in its third year, and while the scandal was developing the league announced that California and Yale will play in next year’s edition.

The game is sponsored by Alibaba Group, the Chinese commerce giant that both UCLA and Georgia Tech visited before the shoplifting incident occurred.