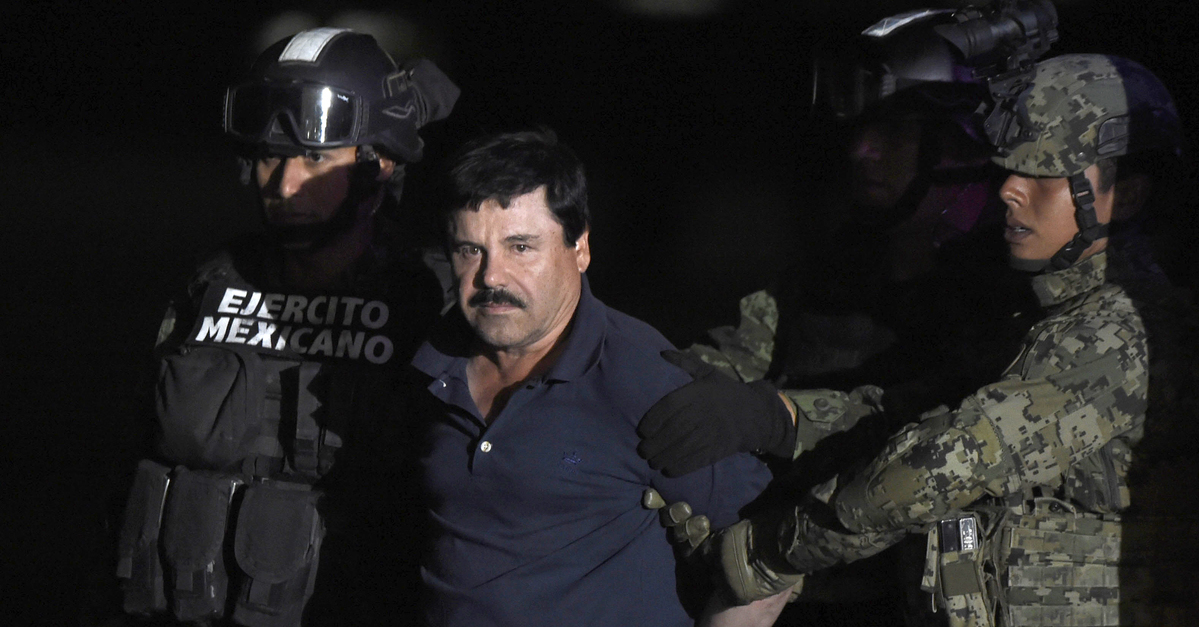 U.S. District Judge Brian M. Cogan previously adjourned in the middle of the opening statement being delivered by Guzman’s defense attorney Jeffrey Lichtman after Lichtman began to cast doubt on the official narrative of the War on Drugs. At one point, the accused drug kingpin’s attorney said:

This is a case that will require you to throw out much of what you were taught to believe in about the way governments work and how they behave, governments in South and Central American and Mexico and even the United States. This is a case which will require you to open your minds to the possibility that government officials at the very highest level can be bribed, can conspire to commit horrible crimes; that American law enforcement agents can also be crooked…

At another point, Lichtman went after the cooperating witnesses being used to testify against his client.

“Why is the government going so far in this case, using these gutter human beings as their prized evidence?” Lichtman asked semi-rhetorically–before answering his own question. “It’s not because of their claim that they need to stop Joaquin Guzman from dealing drugs which reach America. It’s because a conviction of Chapo Guzman is the biggest prize that this prosecution could ever dream of. And they have dreamed of it for decades.”

“[T]hey are killers, they are thieves, they are drug dealers [who have] paid off law enforcement and even the DEA of America,” Lichtman claimed, of the U.S. government’s witnesses against his client.

“Mayo was under multiple indictments in America, his sons and brother are cooperating with this government, and, yet, not only has he never been arrested, but he is continuing his multi-billion dollar leadership of the Sinaloa Cartel,” Lichtman observed to the jurors. “The U.S. government pretends to want [Zambada]. … But somehow they still can’t seem to develop the information required to lead to his arrest. You figure it out.”

Guzman’s defense attorney then made the accusation plain:

They work together when it suits them, Mayo and the United States government. The government witnesses will testify they can make evidence appear and disappear. Criminal files disappear.

Donoghue and his lieutenants were also none too pleased about what they described as Lichtman’s focus on the “so-called ‘war on drugs’ and the U.S. government’s broader drug use prevention efforts.” This was a problem for the prosecution because it, “thereby suggest[s] to the jury that [Guzman’s] case is a broader referendum on policy rather than a criminal trial.”

Among Lichtman’s policy highlights were statements such as, “We had that whole ‘Just Say No’ era during the Reagan years, which obviously accomplished nothing,” and “you will see again that while he has been here in America, the flow of drugs hasn’t stopped. Nothing has changed, business as usual.”

Lichtman’s focus, the prosecution argued, was an improper argument not based on anticipated evidence.

Donoghue also went after the defense for the “repeated refrain” that U.S. prosecutors believe Guzman is the “biggest” drug trafficker in the world.

This repeated assertion is false. The government has not charged the defendant as “the biggest” drug trafficker in the world, and it is required to prove no such thing. … Mr. Lichtman’s refrain is nothing more than an attempt to put the government to a higher legal burden than it actually has by misrepresenting the governing law.

Donoghue’s filing also complained that Lichtman relied upon hearsay and argued an otherwise allowable defense that he hadn’t told prosecutors was coming.

In sum, Lichtman was allowed to speak for at least 15 minutes before being cut off as the court adjourned mid-statement. Now, the prosecution wants all of that verbiage stricken from the record an instruction to the jury to completely disregard it.

In a footnote, Donoghue explained why they believed this was fair to the defense.