The Neo-Nazi Hate Group Involved in Violent Clashes in Sacramento 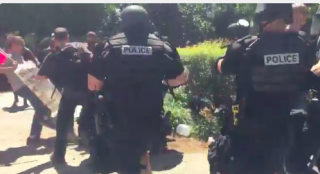 The newly formed Traditionalist Workers Party (TWP) is believed to be involved in violent clashes with anti-fascist protesters in Sacramento, California. At least five people have been stabbed after the riot broke out at the Capitol between more than 150 anarchists, anti-fascist demonstrators, and about 25 neo-Nazis, according to the Sacramento Bee.  The TWP group reportedly had a permit to protest at the Capitol. We put together some background on the group, which is considered to be a neo-Nazi hate group.

Insane video. Crowd sees any signs of “Nazis” and they run&attack. A lot of people bleeding/getting maced. @ABC10 pic.twitter.com/PoFhILfZ95

The Southern Poverty Law Center, a nonprofit group that tracks hate groups across the country, recently profiled the group as a new emerging threat in the hate group world.

“TWP, formed in January of this year (2015) as the political wing of the Traditionalist Youth Network (TYN), an identitarian-inspired umbrella group that aims to indoctrinate high school and college students into white nationalism, ” a recent article on the Southern Poverty Law Center’s website said. The group was set up as the political offshoot of the Traditionalist Youth Network, which was established in 2013.

According to the TWP group’s website. This is their mission:

Our mission is defending faith, family, and folk against the politicians and oligarchs who are running America into the ground. We intend to achieve that goal by building a nationwide network of grassroots local leaders who will lead Americans toward a peaceful and prosperous future free from economic exploitation, federal tyranny, and anti-Christian degeneracy.

The group also says they are encouraging candidates to run in local elections. “Whereas AFP (American Freedom Group), which was formed by a cadre of skinheads in southern California in 2009, has long run presidential candidates with no hope of success, works to exploit the election cycle as a way to raise money and generate publicity for their racists positions, TWP actually hopes to win running for local offices in small communities,” Keegan Akes writes for splcenter.org.

SPLC identifies Matthew Heimbach as one of the leaders of the group. He apparently founded a campus white supremacist group at Towson University in Maryland and has been active in the movement ever since. He has expressed admiration for neo-nazi David Duke.

#Sacramento event was organized by Traditionalist Workers Party (TWP) which is affiliated with Matthew Heimbach https://t.co/XtdbANGSiw

“To be able to get everyone behind the idea [that] the purpose of our movement shouldn’t be about reforming America, should be about trying to make the system better and less unfair towards us, it’s about flipping the table over. It’s about going to temple and saying that this is a violation of God’s law and creating a new homeland for whites around the entire world,” Heimbach said in July 10 2014 during the “Traditionalist Hour.”