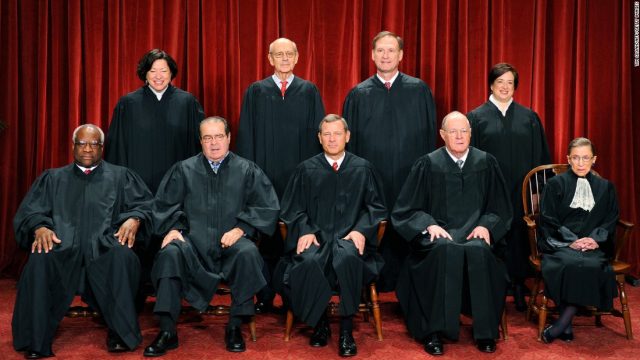 A new study, conducted in part by Northwestern Law professor Tonja Jacobi, attempted to discover if female Supreme Court Justices are interrupted more than their male colleagues. According to Jacobi and her team’s findings, the answer seems to be “yes.” Jacobi told CBS News the study found, “Female justices are interrupted about three times as often as male justice.”

Jacobi is the first to admit that the study was made more difficult by the lack of cameras in the Supreme Court, so she had to rely mostly on transcripts that do not always reflect the flow of a conversation.

The article refers to one particular incident in 2013 that highlights the interruption problem for female justices. During oral arguments in a case dealing with the use of race as a factor in college admission, Justice Sonya Sotomayor questioned a male lawyer when the late Justice Antonin Scalia appeared to interrupt.

“Excuse me,” Scalia said, cutting off Sotomayor. “Can I — can I hear what you were about to say? What are those numbers? I was really curious to hear those numbers.”

Perhaps Sotomayor had cut the lawyer off, and Scalia really wanted answers about the numbers before he forgot. Who really knows. Supreme Court Justices cut each other off frequently. Regardless, what happened between Sotomayor and the lawyer, Jacobi says is a perfect example of something you would rarely see happen to a male Supreme Court Justice. The lawyer actually cuts off Sotomayor.

“Then holistic percentage, whatever it is, is going to be virtually all white,” Sotomayor said. However, the lawyer seemed to interrupt her and even corrected her.

“And that is incorrect,” the lawyer said.

Before Sotomayor could continue, the lawyer just started speaking over her.

“And that is an assumption,” he said (as she tried in vain to speak). “That has no basis in this record.”

Jacobi found it egregious that a lawyer would interrupt justices “who have reached the highest pinnacle of a very high status profession.”

[image via US Supreme Court]