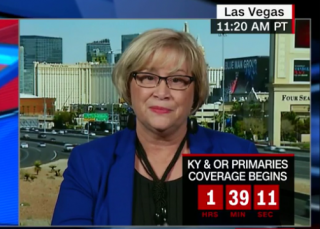 After Bernie Sanders supporters protested at a chaotic Nevada State Democratic Convention, the state party itself is responding to what they’re calling an “explosive situation.” In a letter to the Democratic National Committee sent on Monday, the Nevada State Democratic Party’s attorney, Bradley Schrager stated that they were lodging a complaint against behavior that included convention attendees rushing the dais when the convention began, “halt[ing] the progress of any convention business for much of the day,” and threats made both during the event and after. After the convention had concluded, Nevada state party chair Roberta Lange received violent threats via text messages and phone calls after her information was made public. Angry messages targeted not only Lange, but her husband and children as well.

As far as the allegation that more than 50 Sanders delegates had been disqualified without being given a reason to respond, Schrager described it as a “paranoid fantasy of fraud and delegate theft.” He said that most of the people who were turned away hadn’t registered for the convention. He insisted that the disqualifications were appropriate and made by a panel that was evenly split between the Clinton and Sanders campaigns.

The complaint blamed the Sanders campaign for “the chaos it did much to create and nothing to diminish or mitigate.” Schrager said that the belief that the convention was being stolen was “a narrative of fraud” that “the Sanders Campaign fomented intentionally for its own political gain.” The state party fears that this sort of behavior is not limited to what happened in Nevada, and could continue in Philadelphia at the Democratic National Convention.

State party chair Roberta Lange agreed when she appeared on CNN on Tuesday. She expressed concern that this behavior could continue, and that she has not seen anything from the Sanders campaign saying that this behavior should stop. Regarding the personal threats, she said she gets them “every one to two seconds,” ranging from calls to Facebook posts, to messages about her husband pretending to be from her.

When asked if she would like Sanders to call her and apologize, Lange said, “I think he should apologize publicly.”