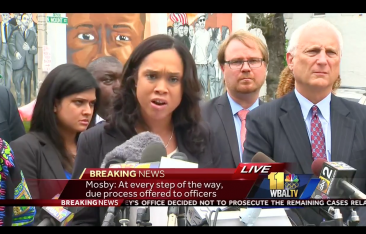 When Baltimore State’s Attorney Marilyn Mosby spoke about the death of Freddie Gray during a press conference last year she was widely criticized for making many inappropriate remarks.  She appears to have learned nothing from that experience over the past year.

On Wednesday, Mosby was back in front of the cameras where she made extraordinary shocking allegations against the Baltimore Police Department, again.  A defiant Mosby refused to take any accountability for her rush to judgment in charging the six police officers just over one year ago.  Instead, she chose to blame the Baltimore police investigators for her inability to sustain a single criminal charge against the accused officers.  Mosby accused investigators of intentionally trying to harm the state’s ability to bring charges, even going so far as to claim investigators committed a felony by manufacturing evidence in the case. Yes, that’s basically what she said.

Mosby’s astonishing accusation was buried in the middle of the lengthy statement she read in front of cameras on Wednesday morning.  It was made amid the portion of her remarks where she railed against what she saw as an inadequate investigation by the Baltimore police department.

“Lead detectives that were completely uncooperative and started a counter-investigation to disprove the state’s case,” Mosby said, shortly followed by the main accusation.

“Creating videos to disprove the state’s case without out knowledge. Creating notes that were drafted after the case was launched to contradict the medical examiner’s conclusion,” she said.

The suggestion could not be more clear.  Mosby just accused Baltimore police investigators of  creating or manufacturing evidence in an effort to sabotage the prosecution of the six police officers. Keep in mind, Mosby was reading from a prepared statement, so it is unlikely that the accusation was some unfortunate slip of the tongue.

A police investigator who manufactures evidence in a criminal prosecution is guilty of a felony.  Yet, Mosby made no mention of bringing charges against the investigator(s) who allegedly committed this offense. Why not?  The most likely conclusion is that Mosby has absolutely no evidence to support such a claim, especially with respect to the statement about “creating videos.”

Rather than accepting responsibility her own failings as a prosecutor, Mosby is again trying to pin everything on the Baltimore police department.  This is nothing more than a desperate attempt to save her career in public service and it should not come as a surprise to anyone who has been paying attention.  It is simply the latest example in a pattern of shameless behavior that began last year when she prematurely announced the charges against the six police officers.  As a result, she has now almost certainly poisoned whatever relationship she may still have with the Baltimore police department — all amid a huge spike in murders in the city.  What a disaster.