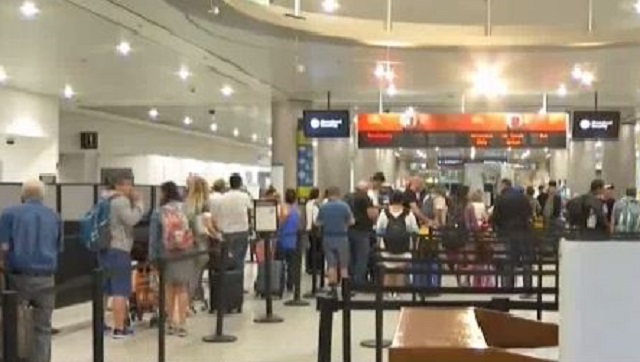 Police shot a man who wielded a knife and tried to get into a Miami airport terminal from a runway, prompting the closure of a busy concourse as travelers tried to leave Florida ahead of Hurricane Irma, authorities said.

Miami-Dade Police Director Juan Perez said late Thursday that the unidentified suspect entered a restricted area on the tarmac “where the airplanes actually come in.”

“One of the sergeants that responded observed a gentleman on the tarmac. The gentleman fled into a room allegedly armed with a knife,” Perez told reporters during a news conference.

The man tried to leave the room and get back into the terminal through the ceiling, Perez said. That’s when officers confronted the man and shot him, Perez said.

Perez said the suspect was taken to a hospital in stable condition to be treated for his injuries. It’s not clear how he was able to breach security and get onto the runway.

“We do not believe this is related to a terrorist incident at all, but we are not ruling that out because it is early,” Perez said.

Many travelers are jamming flights to get out of the path of the hurricane, which devastated a string of Caribbean islands and is on its way to Florida this weekend. A half-million people were ordered to leave South Florida on Thursday. The powerful storm was downgraded to a Category 4 hurricane early Friday.

Shawn Woodford and his wife were about to board a flight home for Canada when firetrucks and police cars came “flying across the tarmac” and “surrounded a plane at the gate next to us,” he told The Associated Press.

The plane at the gate was a Latam Airlines flight to Santiago, Chile, according to Miami’s departures board. Latam officials did not immediately respond to a request for comment from the AP.

A short time later, police came into the terminal where Woodford and his wife were and “said ‘everybody out of here’ and evacuated the entire concourse,” he said.

The closure led to some flights being delayed or moved to other gates. Woodford was able to board his flight for Toronto — at a different concourse and nearly 4 hours after his original departure time.

The Latam flight to Santiago was listed as delayed for hours, finally leaving at 1:30 a.m. Eastern.

This article was written by Kelli Kennedy of the AP.