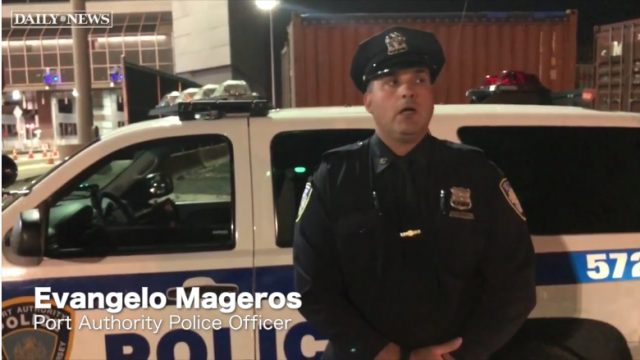 Port Authority Police Officer Evangelo Mageros was one of the first responders to arrive at the site of the terrorist attack in lower Manhattan on November 1.

Mageros was performing security inspections on Canal Street adjacent to the Holland Tunnel when he heard the sounds of people screaming. It was around 3:05 pm. Stopping what he was doing, Mageros got in his car and drove in the direction of the screams.

He recalled the initial moments, saying, “I parked my car and went wherever I could. When I came over, people were saying that a truck just ran over people.”

Almost immediately, Mageros came upon the body of a woman laying next to a bicycle recently misshapen by the attack. He said:

She was complaining that she couldn’t feel any part of her body. She was laying down on the pavement. We gave her oxygen. I told her there everything was going to be okay. She told me, ‘Please don’t let me die.’ How do you respond to that? It’s very difficult.

Soon after that, Mageros began to contemplate the gravity of the situation. As he looked around, he noticed the other bodies. Some were inert. Some still screaming for help. Eventually, Mageros was joined by cops with the New York City Police Department, EMTs and firefighters. Together, they sorted through the wreckage and tended to the wounded–rendering aid when they could, and pulling bodies away from the chaos when they couldn’t.

Mageros described the scene before him:

For all of his efforts at the site of the attack in its immediate aftermath–and though committed to helping and saving lives there–all Mageros could think about afterwards was his son. He said:

He calls me every night and asks me, what happened today? Did you arrest anybody? I had to explain to him what happened. He has to know that there is evil in this world.