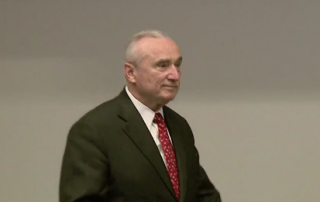 After a shooting that claimed the life of one concert-goer and injured three others in New York City Wednesday night, NYPD Commissioner Bill Bratton seemed to blame rappers in general, NBC4 reported. During an interview on Thursday, Bratton commented on “the crazy world of these so-called rap artists who are basically thugs that basically celebrate violence they did all their lives,” saying, “unfortunately, that violence often times manifests itself during their performances.”

Gunshots just went off at the T.I concert, never been so scared in my life pic.twitter.com/rn0CjpAuaU

The incident took place in a third floor VIP lounge at a show featuring rapper T.I., while an opening act was on stage. While T.I. does have a criminal record, there is no indication that he had anything to do with the shooting that took place in the audience. Perhaps Bratton was implying that T.I. knew the shooter, as he said that rappers “continue hanging out with the same people they hung out with when they came out of that world of desperation, poverty, and crime.” One of the people injured was another rapper, Ronald Collins, who goes by the name Troy Avenue.

At this time, police are still searching for the gunman.