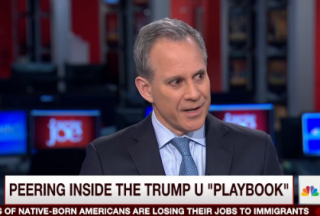 There are multiple lawsuits against presumptive Republican Presidential nominee Donald Trump and Trump University, the real estate program that many are claiming hoodwinked them out of thousands of dollars. One of the cases is being brought by New York Attorney General Eric Schneiderman, who appeared on MSNBC’s Morning Joe Wednesday morning.

“It’s fraud.  This is straight up fraud,” Schneiderman said about Trump University. “It’s like selling people something you say is a Mercedes and it turns out to be a Volkswagen.  And even if some people say well, I actually kind of like the Volkswagen, it’s still fraud because it’s not a Mercedes.”

The Attorney General discussed documents and sworn testimony from Trump and University president Michael Sexton, saying that Trump never met his so-called “hand-picked” instructors, and had nothing to do with the curriculum, that was supposed to be based on his personal real estate secrets. “Trump’s role was really as the pitchman,” Schneiderman said.

Trump has defended his program, stating that many past students have given the classes positive reviews.

Perhaps even more interesting, was the revelation that Trump’s attorney discussed settling the case with Schneiderman’s office. “He did offer to settle,” Schneiderman said. “He settles cases all the time.” This contradicts Trump’s own declaration that he made on Morning Joe in March, that he would not settle the case.

Skip to the 4:15 mark for the relevant part of the video below:

Schneiderman mentioned that he has already won a number of motions in the case, but that he does not expect any of the Trump University trials to take place before November’s election.