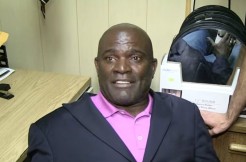 It happened in Palm Beach Gardens when he was entering a turnpike, according to an affidavit obtained by The Sun-Sentinel. Florida Highway Patrol said he more-than-failed to merge onto traffic: He hit the side of a motorhome, swerved, then sideswiped a stopped patrol vehicle. Authorities said a breath tests showed Taylor had a blood-alcohol level of .082 and .084 almost five hours after the crash. In Florida, it is illegal to drive with a blood or breath alcohol level of .08 or more. He was sent jail, but was released on Saturday morning.

As a football player, Taylor was renowned for his skill. His off-the-field behavior got even more attention for the wrong reasons. He’s had many legal problems with drugs (dating back to the 80s), tried to choke a reporter in 1995, pleaded guilty in 1997 to filing false tax returns, and pleaded guilty in 2011 to sexual misconduct with a 16-year-old.
–