Mattis Needs Waiver to Get Around Law Keeping Him From Office; House Dems Not on Board | Law & Crime

Mattis Needs Waiver to Get Around Law Keeping Him From Office; House Dems Not on Board 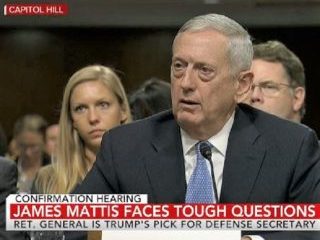 The confirmation hearing for President-elect Donald Trump‘s nomination for Secretary of Defense, retired Marine General James Mattis, began Thursday morning before the Senate Armed Services Committee. One issue that was raised before Mattis even started testifying is his eligibility for the office. Mattis, who served his country in the Persian Gulf War, as well as the more recent wars in Iraq and Afghanistan, retired in 2013, which poses a problem if he wants to head the DoD.

Because of this, Republican Senators are pushing for a statutory waiver that would allow Mattis to hold the office. This was done in 1950, when General George C. Marshall became Secretary of Defense, despite having been Army Chief of Staff until 1947. Congress allowed Marshall to take the job, but they made it clear that they didn’t want to make a habit of doing this. When Congress passed legislation that let Marshall become Secretary, they specifically said, “the authority granted by this Act is not to be construed as approval by the Congress of continuing appointments of military men in the office of Secretary of Defense in the future.”

Former Georgia Senator Sam Nunn pushed for a statutory waiver while touting Mattis’ qualifications for the position when he introduced the General Thursday morning. Senator John McCain, who gave the opening remarks at the hearing, said that members of the confirmation panel will consider a statutory waiver after the hearing concludes. The legislation for a waiver would have to be passed by both the Senate and the House.

Mattis may run into trouble, though, after Trump’s transition team canceled an appearance before the House Armed Services Committee, which was supposed to take place Thursday after his Senate hearing. The decision to cancel ruffled feathers on both sides of the aisle, but House Democrats have threatened to block the necessary waiver without having Mattis testify before them.

Washington Rep. Adam Smith, the ranking Democrat on the House committee, told Politico, “I’m going to urge all House Democrats to vote no on the waiver.” Rep. Tim Waltz said, “If Gen. Mattis had come over and answered the questions, I certainly think I would support that,” adding, “This just complicates it, and it doesn’t make any sense.”

A number of House Republicans, while still supporting the waiver, shared some of the sentiments expressed by their Democratic counterparts. Arizona Rep. Martha McSally said to Politico that she doesn’t understand why the transition team pulled Mattis from his House appearance, and said it could have consequences. “We had the potential for a good, bipartisan vote, but maybe lost that potential now over this move,” she said, “and it could have been avoided.”

Texas’ Mac Thornberry, the House Armed Services Chairman, was also confused by this. “The transition team told me last night that they would not allow him to come and testify, even though we have been communicating with them since December, and even though Mattis himself is enthusiastic to come testify,” he said. “I think it’s a mistake. This is a big issue — it hadn’t come up in 67 years — it deserves a hearing.” Despite Thornberry saying that Mattis wanted to go before the House, a source told Politico that Mattis did not want to make appearances on Thursday before both the House and Senate.

Despite the confusion and disappointment over the move, a waiver still looks like a strong possibility. There’s not much that House Democrats could do to block it, as Republicans have a majority and seem to still be on board with Mattis’ confirmation, even if they’re not happy with how the process is being handled.