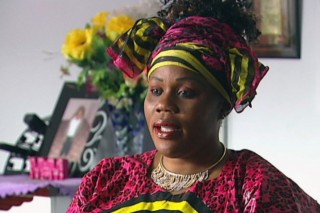 A group of gunmen was hired to kill Noela Rukundo by her husband, but the attack apparently didn’t go as planned. She survived unbeknownst to her husband Balenga Kalala, who had already planned her funeral. As all the mourners left, Rukondo decided to surprise her husband, according to a new interview with the BBC.

“When I get out the car, he saw me straight away. He put his hands on his head and said, ‘Is it my eyes? It is a ghost?” she told the television station, “Surprise! I’m still alive.” Her ordeal started in  Burundi, East Africa, where she basically convinced the men, who had been hired to kidnap and kill her, to set her free.

“We give you 80 hours to leave this country,” Noela told the BBC what the hired hitmen told her. “Your husband is serious. Maybe we can spare your life, but other people, they’re not doing the same thing. If God helps you, you’ll get to Australia.”

Rukundo was living in Australia at the time. Her husband, Balenga Kalala, pleaded guilty last December to incitement to murder, and was sentenced to nine years in prison. During a police interview, Kalala denied any involvement, but he became emotional when he was presented with a phone recording.