Know Your Rights: What You Can — and Can’t — Do During a Protest 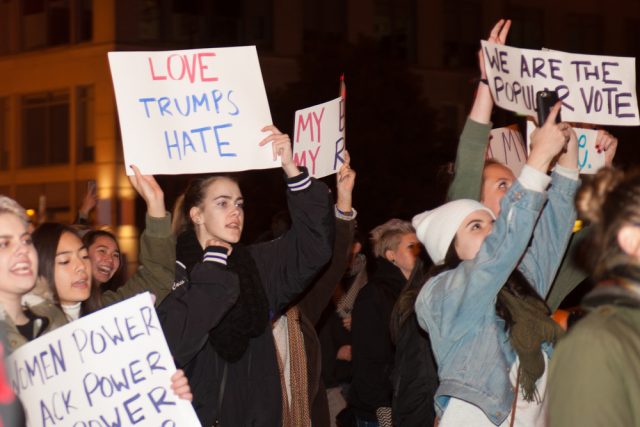 Protests have already begun in different parts of the country as the United States awaits the inauguration of President-elect Donald Trump. One of the hallmarks of American society is the freedom of speech and peaceful assembly guaranteed by the First Amendment. But that freedom doesn’t give people a free pass to break other laws, and those looking to exercise their rights should know what they can and can’t do legally.

The first thing to remember is that the freedom of speech and assembly only guarantees the right to protest on public property. Streets, public parks, and plazas outside certain government buildings are generally fair game (although certain public areas may require permits), but private property is off limits if the owner doesn’t grant permission. For example, if a protest spills onto someone’s lawn, if the owner tells you to leave and you don’t, they can have you arrested for trespass, no matter how peaceful you’re being.

Additionally, even on public property, freedom to assemble is not absolute. The government can impose restrictions on the time, place, and manner of assembly, if it’s for a significant government interest, doesn’t target the content of people’s speech, and if other means of expression are available.

If there is a counterprotest, police will often make sure there is distance between opposing demonstrations. This is meant to keep the peace and is allowed.

Even if you’re on public property, you still can’t be physically disruptive. That includes blocking streets, sidewalks, or building entrances. No matter what your message is or how calmly you’re speaking, blocking traffic can get you arrested.

This should be a no-brainer, but expressing your beliefs or opposing a political figure or position doesn’t give you a free pass to antagonize others. Emotions can run high at protests, but law against harassment and assault still apply. Threats and violence are not protected, even if they’re political expressions.

Feel free to take pictures and record videos of anything that’s in plain view from public areas. However, once again be careful when it comes to private property. If a private owner doesn’t want you taking photos or videos of their property, listen to them. Another issue to be careful of is audio recording. Different states have different rules when it comes to recording conversations. Some states require all parties in a conversation to consent to being recorded. So if you’re overhearing a conversation — even inadvertently while recording video — or if you’re talking to someone who hasn’t agreed to being recorded, be careful, and familiarize yourself with local laws.

What if You’re Arrested — Even Improperly?

Police will often monitor protests to keep the peace. What happens if an officer approaches you? You may not think you’ve done anything wrong, and you may be right. The ACLU has some useful guidelines on what to do if police approach you or place you under arrest. First off, be respectful. Nothing good will ever come out of antagonizing a police officer. If you’re wrongfully arrested or otherwise treated improperly, take legal action afterwards. Resisting arrest or otherwise keeping an officer from doing their job can result in additional charges.

There are plenty of lawyers who have already volunteered to give free legal representation to protesters who get arrested at Trump’s inauguration.

Knowing your rights, and what’s forbidden, can help make your protest (or counterprotest) more effective. So if you’re eager to make your voice heard, do it properly and, most importantly, stay safe.