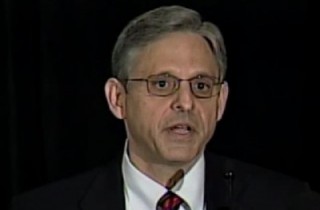 The most popular article on The Washington Post website this weekend is an opinion piece by Gregory Diskant, a senior partner at Belknap Webb & Tyler, that is headlined ‘Obama can appoint Merrick Garland to the Supreme Court if the Senate does nothing.’

“The Constitution glories in its ambiguities, however, it is possible to read its language to deny the Senate the right to pocket veto the president’s nominations,” he writes. The jist of his legal analysis is this: If the Senate fails to vote/take up Garland’s nomination, senators are effectively waiving their constitutional right to provide ‘advice and consent.’ Therefore, he argues, it would be permissible for President Obama to ‘exercise his appointment power’ by naming Garland to the Supreme Court without them. Mr. Diskant recognizes that the Senate would probably file a lawsuit but he says, “this should not be viewed as a constitutional crisis but rather a healthy dispute between the president and the Senate about the meaning of the Constitution.”

Really, a healthy dispute? The editorial has sparked thousands of outraged comments. The outrage is more than justified. Mr. Diskant’s work-around to bypass the Senate would not only erode the public’s confidence in the office of President, it would be highly unprecedented, and likely unconstitutional.

In a recent Congressional Research Service the document is pretty clear “To receive lifetime appointment to the Court, one must first be formally selected (“nominated”) by the President and then approved (“confirmed”) by the Senate.” Since 1789, presidents have submitted 161 nominations for the U.S. Supreme Court. Of those nominations,  124 were confirmed (7 declined to serve), according to the Senate’s own website. That said, there have been a few times where a President installed a nominee during a Congressional recess, but, in all circumstances that I could find, the nominee was later confirmed (or in the case of John Rutledge rejected) by the Senate. In fact, in 1795, Rutledge was offered a temporary position on the Supreme Court by President Washington while the Senate was in recess. According to Senate research, he is the only ‘recess appointed’ Justice not confirmed by the Senate.  And guess what happened when he was rejected by the Senate? He was removed from the office.  He was not allowed to serve on the Court. There is no dispute that Mr. Diskant’s approach in his editorial would be highly unprecedented.

There is also no doubt that it would spur intense outrage by the American electorate. As evidenced by the rising popularity of presidential Republican nominee, Donald Trump, U.S. citizens are weary of the Washington D.C. establishment, and their supposed propensity for skirting the will of the American people. An appointment without the ‘advice and consent’ of the U.S. Senate, would surely be looked at as nothing short of a blow to the separation of powers. Republicans are already critical of Obama for his extensive use of executive orders (which have, of course, been used by Presidents on both sides of the political aisle). This would only add more fuel to the fire.

Lastly, what about the legal side? Well, let’s look back at what the founding fathers said on this.  They seemed pretty clear that they didn’t want the sole responsibility of who ends up serving in the Supreme Court to be with the President alone. Founding father Gouverneur Morris described the advantages of a two stage process (nomination and confirm) this way: “As the President was to nominate, there would be responsibility, and as the Senate was to concur, there would be security.” Even Alexander Hamilton, though conceding the President has a lot of power in this process, recognized the importance of the Senate : “..as it would be his sole duty to point out the man who, with the approbation of the Senate, should fill an office, his responsibility would be as complete as if he were to make the final appointment.” (Fedaralist No. 76) Emphasis added on “approbation of the Senate.”

Sen. James Iredell (who was appointed to the U.S. Supreme Court in 1790) observed:

“..the Senate has no other influence but a restraint on improper appointments. The President proposes such a man for such an office. The Senate has to consider upon it. If they think him improper, the President must nominate another, whose appointment ultimately again depends upon the Senate.”

Lastly, in the 2014 Supreme Court decision National Labor Relations Board v. Canning which was the first to address the constitutionality of recess appointments, the Supreme Court agreed that the Senate has a very important responsibility in this process. The Justices indicate in their unanimous decision that the only exception to the President receiving the “Advice and Consent of the Senate” before appointing an “Office of United States” is a recess appointment. Even then, they defined this constitutional right to be very limited. I think it is pretty clear that refusing to take up Garland’s nomination would not count as ‘advice and consent’ by the Senate.

The Founders intended the norm to be the method of appointment in Article II, §2, cl. 2, which requires Senate approval of Presidential nominations, at least for principal officers.

Therefore, Mr. Diskant’s interpretation — that the President can somehow circumvent the ‘advice and consent’ of the Senate (or waive it by not responding) — while imaginative, and unique — would not only be contrary to the will of the American people but it would likely be deemed unconstitutional.