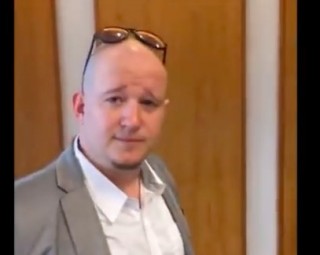 There is a very strange twist in the class action fraud lawsuit filed against the Democratic National Committee and former Chair Debbie Wasserman Schultz. The recent developments haven’t gotten much mainstream media attention, but they are all documented in federal court. So, we decided to dig into them. And yes, they involve a lawsuit process server — who “served” the DNC with the class action paperwork—and then suddenly died.

The lawsuit, which was actually filed before the Wikileaks document dump, claims that the DNC “actively concealed its bias” from its donors and supporters backing Bernie Sanders. Hundreds of Sanders supporters have reportedly signed up to be part of the class. They have even started a very active Facebook page.  The plaintiffs say the recent Wikileaks emails only give them more evidence that the Democratic National Committee was on board with Hillary Clinton from the very start.

A guy named Shawn Lucas “served” the DNC and Debbie Wassermann Schultz with a lawsuit back in July. He was a lawsuit process server. He even posted a YouTube video of him serving the lawsuit which can been seen below. The video has garnered nearly a half a million views. That’s partly because about a month after he served the lawsuit and amidst the Wikileaks scandal, Lucas suddenly died. Online conspiracy theorists have said the two must be related. There is absolutely no evidence of that so far. The police report says he was found unconscious laying on the bathroom floor of his Washington D.C. home.  The D.C. Metropolitan Police tell LawNewz.com that the investigation is still ongoing.

But the video has become the subject of a court fight. The question is whether the plaintiffs (the Bernie Sanders supporters) properly served the the defendants (Wasserman and the DNC). That actually matters because, according to the federal rules, if you don’t serve the lawsuit properly to the opposing side, you can’t move forward with the case. Lawyers for the DNC contend they weren’t properly served.  If you watch to the video, you will see Lucas served the lawsuit to a woman named Rebecca Herries. She was apparently an assistant to one of the DNC executives.  DNC lawyers are trying to derail the case by saying that that even though she works for the DNC,  “she doesn’t have authority” to accept the lawsuit. If you read the transcript, you will see that she certainly made it seem like she had authority to deal with the legal matter. Here’s how the conversation went down, according to the video:

Process Server: “You’re with the DNC”

Process Server: “All right, well this is going to be a service to the DNC”

Process Server: “And this is for Debbie Wasserman Shultz”

Process Server: “You guys have been served.”

Process Server: “Thank you so much, we’ll see you in court”

Of course, Lucas could not testify about what happened because he is dead. In an order that came out Wednesday afternoon, Judge William Zloch sided with the DNC — but did chastise the DNC lawyers for their apparent shenanigans over being served.

“No evidence at the hearing explains Ms. Herries’s conduct; however, the Court hereby advises Defendant DNC that will not tolerate the conduct in which Defendant DNC engaged in this instance,” Judge Zloch wrote in his order. The judge ordered the plaintiffs to re-serve the case on the defendants. This lawsuit will be an interesting one to follow –especially when the judge actually gets into the meat of the allegations.  Stick with LawNewz.com for updates.