Here’s How It Works: Industry, Lawmakers and Money Mingle in Cleveland 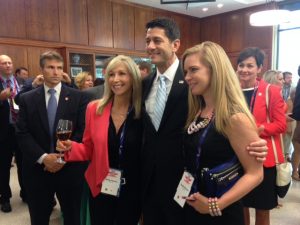 House Speaker Paul Ryan’s impassioned speech to unite the GOP on Tuesday was not the last he would give in Cleveland. A national Republican organization brought in the big guns for their fundraiser, with Ryan headlining the event to inspire donations.

In the tranquility of the Cleveland Botanical Gardens on Wednesday, miles away from the madness surrounding the Quicken Loans Arena, Ryan stressed the need to coordinate and strengthen the Republican party on the federal, state, local and federal levels. His audience? A bevy of state legislative leaders rubbing elbows with industry interests.

The afternoon of cocktails and hors d’oeuvres was organized by the Republican Legislative Campaign Committee, part of the Republican State Leadership Committee, a national 527 political organization that aims to elect down-ballot Republicans.

The two-hour catered event treated politicians and their corporate guests to salmon-wrapped asparagus, watermelon topped with bleu cheese and edible flowers, and two open bars. (Note to watchdogs: This probably was ethically fine for Ryan and any other federal lawmakers there.) Republican officials and representatives of GOP-aligned big money groups like American Crossroads milled about chatting with corporate officials representing some of the biggest corporations in the country, from industries as diverse as tech and retail to fossil fuels and private prisons.

Reporters for the OpenSecrets Blog were not on the invitation list, but were able to gain access to the event.

Together, the more than two dozen corporations and organizations sponsoring the event have given $12.4 million to the RSLC’s efforts since 2013. More than half of that came from just two donors: the U.S. Chamber of Commerce, $5.4 million, and the Altria Group, which gave nearly $1.2 million.

Republicans are not alone in raising cash from corporations that hope to curry favor with legislators who will be formulating policies that will affect their bottom line. The RSLC’s analog on the left, the Democratic Legislative Campaign Committee, raises millions from unions and corporations, and Democratic leaders will almost certainly be wooing these groups next week in Philadelphia.

Very few of the sponsors at this morning’s RSLC event, however, have been as generous with the DLCC. In all, those same sponsors only gave $2.3 million to the DLCC since 2013, and 11 have not given a single contribution to the Democratic group in that time frame. On average, the corporations sponsoring the Paul Ryan event favor the RSLC more than eight to one over the DLCC, with only four companies — Wal-Mart, AT&T, Monsanto, and Microsoft — having a near even split in support for both.

Early in his speech, Ryan gave a nod to fossil fuel interests present, such as the American Coalition for Clean Coal and Electricity, a sponsor, and the American Fuel & Petrochemical Manufacturers, on the invitee list, in the middle of a metaphor about government effectiveness.

“In the House we sort of see ourselves at the bottom of a ship, shoveling coal into the engine,” Ryan said. “By the way, there’s nothing wrong with shoveling coal into an engine. Shout out to coal country,” he said, as the crowd burst into applause.

Ryan concluded by emphasizing that the party needs resources to “make sure the down ticket stays strong” and maintain a “big and deep party” on all levels of government.

Big Pharma had a strong showing, with event backing from Astellas Pharma, Pfizer, Novartis and Teva Pharmaceutical Industries. The pharmaceutical manufacturing industry as a whole has been a big supporter of the RSLC, giving more than $3.4 million since 2013.

Other notable sponsors include two of the largest private prison corporations, Corrections Corporation of America (which gave $53,000 since 2013) and the GEO Group. OpenSecrets Blog reporters also spied nametags laid out for foreign dignitaries, including Nigel Farage, Brexit leader and former head of the U.K. Independence Party, and Ron Dermer, the Israeli ambassador to the U.S.

Written by Ashley Balcerzak and Robert Maguire from Open Secrets. Open Secrets is a non-partisan nonprofit organization which tracks money in U.S. politics.