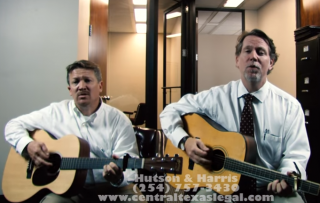 A good advertising campaign can do wonders for a small business. The right slogan or jingle can get in your head and make the company’s brand a known entity. Attorneys Will Hutson and Chris Harris of the Hutson & Harris law firm in Texas nailed it with their commercial that’s been hitting the local airwaves and going viral on the internet.

Brandishing acoustic guitars and using harmonies that would make Simon & Garfunkel proud, Hutson and Harris advise prospective clients not to destroy evidence in their commercial’s song, “Don’t eat your weed.” The jingle tells people that if they get pulled over while having marijuana on them, better to risk getting caught with the pot than getting busted trying to get rid of it by eating the goods.

Be entertained and informed by the video below:

“Don’t let a class B turn into a felony,” the songbirds delightfully warn in unison, saying that having two ounces or less of marijuana is a class B misdemeanor in Texas, compared to possible third degree felony charges for tampering with evidence.