DOJ Dismisses Nunes Memo: ‘We are Currently Unaware of any Wrongdoing’ | Law & Crime

DOJ Dismisses Nunes Memo: ‘We are Currently Unaware of any Wrongdoing’ 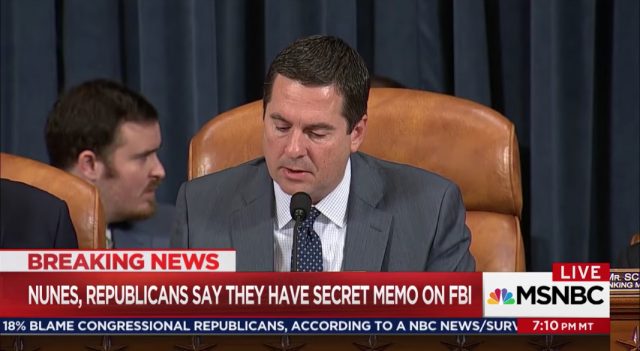 The Department of Justice on Wednesday warned congressional Republicans against the release of–or reliance upon–a memo said to document abuses of the U.S. surveillance state apparatus.

Though we are currently unaware of any wrongdoing relating to the FISA process we agree that any abuse of that system cannot be tolerated.

Boyd’s letter goes on to stress that the DOJ takes seriously its task to dispense justice and that allegations of abuse at the hands of DOJ employees are taken seriously.

The letter also stresses that the DOJ understands why members of the House Intelligence Committee are attempting to release the Nunes memo, noting, “The rule of law depends on the confidence of the American people that our prosecutors and investigators apply the law fairly and without bias or regard for political influence.”

But that’s about it for understanding. The rest of the letter warns congressional Republicans against releasing the memo, starting off with an oblique reference to the document’s allegedly classified nature. Boyd writes, “Media reports indicate that the Committee’s memorandum contains highly classified material confidentially provided by the Department to the Committee in a secure facility.”

Then the gloves come off entirely. The letter reads:

In addition, we have also heard that [Intelligence Committee members are] considering making the classified memorandum available to the public and the media, an unprecedented action. We believe it would be extraordinarily reckless for the Committee to disclose such information publicly without giving the [DOJ] and the FBI the opportunity to review the memorandum … Indeed, we do not understand why the committee would possibly seek to disclose this information without first consulting the relevant members of the Intelligence Community.

The much-ballyhooed memo has been the subject of fierce debate for the past few days–with multiple Republicans demanding its release and hinting at its allegedly dire contents.

Representative Mark Meadows‘ speech on the House floor was indicative of GOP response to the memo thus far. He said, “I’m here to tell all of America tonight that I’m shocked to read exactly what has taken place. I thought it could never happen in a country that loves freedom and democracy like this country. It is time that we become transparent with all of this, and I’m calling on our leadership to make this available so all Americans can judge for themselves.”