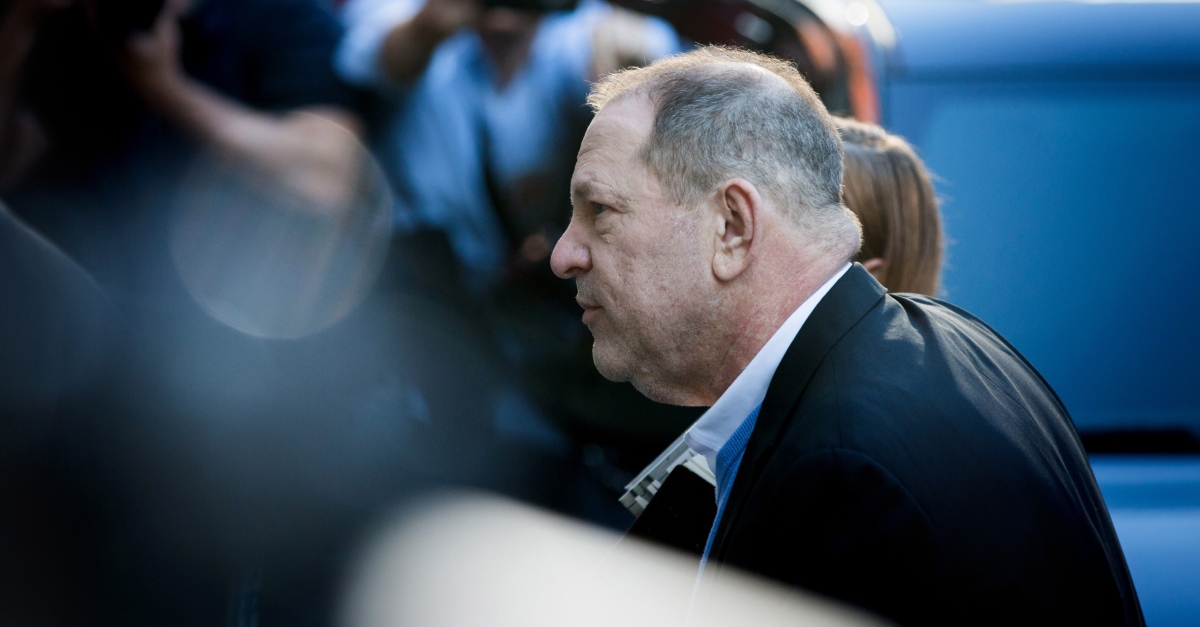 New York authorities are dealing with new complications from a detective in the Harvey Weinstein case. This investigator allegedly told an accuser she should delete information from her cell phones before giving them to the Manhattan District Attorney’s Office, according to a letter from prosecutor Joan Illuzzi-Orbon to defense lawyer Benjamin Brafman.

The woman said that the detective advised she could delete information she didn’t want others to see before giving over the phones.

“We just won’t tell Joan,” the detective allegedly said in this letter obtained by Law&Crime.

The woman had voiced concern about the phones because these contained personal information, but, according to prosecutors, she did not delete anything from her phones, and instead hired a lawyer for advice.

The detective in question, Nicholas DiGaudio, was previously accused of coaching a witness and withholding information about her account, even though it undermined a sexual assault allegation by former actress Lucia Evans. The relevant charges against Weinstein were recently dropped.

“Notwithstanding this communication with Detective DiGaudio, Complainant 2 did not delete anything from her cellphones, and instead retained Lawyer A for advice,” Illuzi-Orbon wrote.

She said prosecutors only learned about this the previous week, after the woman’s lawyer contacted them.

“A woman should not have to surrender confidential intimate information that’s immaterial to the case to defend herself against a sexual predator,” President Michael Palladino told Law&Crime in a statement. “That’s being victimized twice.” He added that the most important part of the letter was paragraph six, which showed the detective’s actions “did not influence the victim’s evidence or testimony. The rest of her letter says an awful lot about nothing.” He suggested this was a “smear campaign” against the detective to cover up prosecutors’ “incompetence.”

Brafman is using the development as more ammo to attack the prosecution’s case.

“This new development even further undermines the integrity of an already deeply flawed indictment of Mr. Weinstein,” he said in a statement obtained by Law&Crime.

“This new twist in the Harvey Weinstein case is not necessarily the worst news for the prosecution,” she told Law&Crime in an email. “While the idea that the complainant would want to hide personal information from the DA might raise some red flags in terms of her credibility, the fact that she came forward (through her lawyer) to let the DA know of the detective’s unethical suggestions to her gives her an air of credibility, especially if at the end of the day she did not delete anything from her phone.”

The bad news for prosecutors, however, is that Weinstein’s defense will use this as leverage.

“The problem for the prosecution is that this rogue detective seems to have been involved in all aspects of this investigation which creates open season for Mr. Brafman’s cross-examination,” Rendelman added.

“This new allegation against the detective does not impact the credibility of the underlying claim against Weinstein,” he said. That’s because the personal cell phone information ostensibly had nothing to do with the case.

Abrams argued this is different from the Evans situation. In that case, prosecutors had not been informed about the evidence, but it wasn’t the withholding of evidence that led to the dismissal.

“It was the substance of what the new witness was saying,” Abrams said.

Nonetheless, Abrams suggested that Brafman could use the cell phone allegation to undermine DiGaudio’s credibility if and when testimony happens.

Since last October, dozens of women publicly claimed that Weinstein, one of Hollywood’s most powerful producers, used his power to sexually harass, assault, or rape them. He has denied all claims of nonconsensual sex.

Note: This article was updated with a statement from Palladino.