D.C. Voters Sue for Actual Representation in the U.S. House and Senate 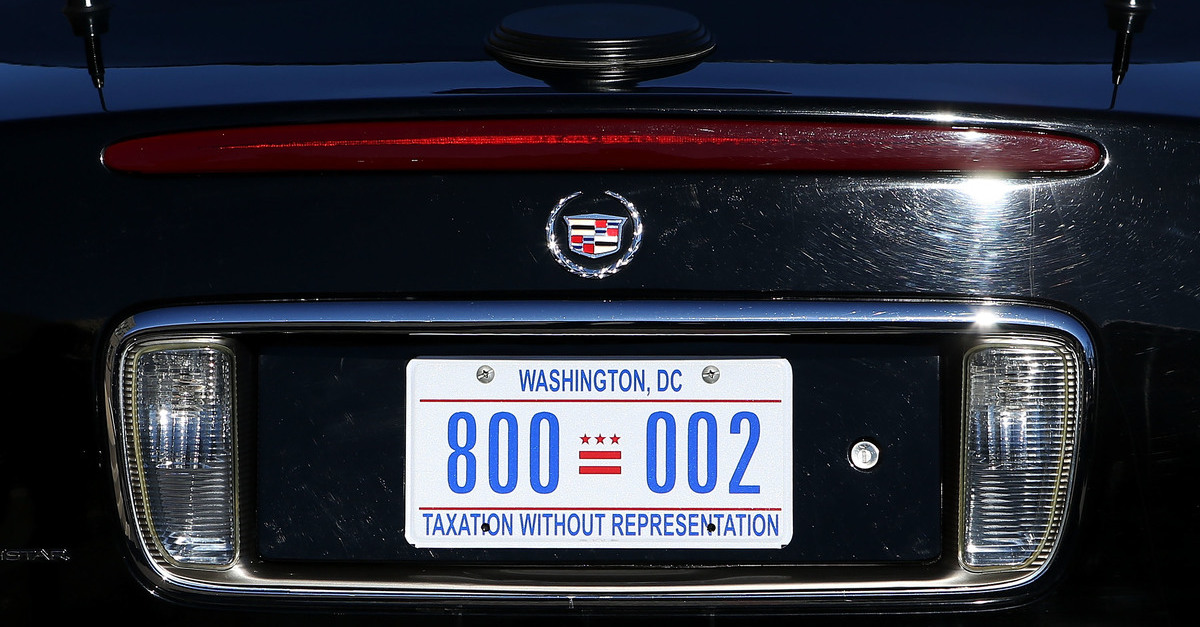 Voters say the near 700,000 residents of Washington, D.C. suffer from a peculiar though distinctly American form of political repression: they are taxed without representation in the U.S. Congress. A lawsuit filed on Monday morning aims to change all that.

The 10 named plaintiffs live in various wards throughout the District of Columbia. Through the lawsuit they intend to represent the “more than 690,000 United States citizens who are also residents” of the district who are currently disenfranchised. According to the filing, “Plaintiffs are united in their desire to secure and exercise their fundamental right as citizens of this country: the right to fully participate in the electoral franchise and secure voting representation in Congress.”

Washington, D.C. currently has one elected “delegate” who serves in the U.S. House of Representatives. This delegate, Eleanor Holmes Norton (D), currently has many of the same powers as all other members of Congress except for one fairly conspicuous one: she does not have the right to vote on legislation on the House floor. Notably, Congress has vacillated between allowing D.C.’s non-voting delegate to vote in exactly one congressional committee–the one which schedules all the House votes that the delegate is never allowed to actually vote on.

In language redolent of the first American revolutionaries the plaintiffs charge:

[T]he right to voting representation in Congress has been wrongfully denied to the Americans who live in the District of Columbia, the Capital of the Free World, since the federal government officially took control of the District as the country’s national capital…

The lawsuit continues, noting that “Members of Congress have correctly concluded that Congress has the constitutional authority to provide voting representation in Congress to District residents under the ‘District Clause’…of the U.S. Constitution.”

And this denial, the lawsuit points out, is aberrational.

“Notwithstanding that recognition, Congress continues to deny the hundreds of thousands of Americans of voting age in the District their fundamental voting rights,” the filing notes. “[I]t continues to do so despite the fact that other American citizens who live on federal enclaves exercise their right to vote because Congress has taken action that requires States to permit them to vote even though they live on federal land.”

The lawsuit also notes that D.C. residents previously had the right to vote with representation in Congress but that these rights were curtailed by Congress and never restored.

Between 1790 and 1800, before the federal government took control of the territory ceded by Maryland and Virginia, Americans who had been citizens of Maryland and Virginia prior to the cession continued to exercise their right to vote for representation in both houses of Congress. In 1793 and 1794, in fact, District resident Uriah Forrest served in Congress with full voting rights. When the United States assumed jurisdiction over the District, District residents lost voting representation in Congress as a result of Congress’s failure to take action.

This loss of representation is laid at the feet of Congress in the filing.

“It was congressional action…not action by the Framers…that effectively deprived District residents of their right to vote for full voting representation in Congress,” the filing alleges. “Although Congress has acknowledged its power under the District Clause to grant back to the District residents the right to full voting representation, Congress has failed to act, and that power has lain dormant since 1800.”

The plaintiffs are requesting various forms of relief including a declaratory judgment be issued that asserts D.C. residents’ right to vote for representation in the U.S. House and Senate. Another request is that D.C.’s non-voting delegate be granted all the “powers and privileges afforded” to other House members.

The lawsuit also demands that Congress be given “a reasonable period of time” to address those requested declaratory judgments in order “to fashion a constitutional remedy” that grants D.C. residents the right to vote for members of the Senate–up to and including making D.C a state of the Union.

In the absence of such action, however, the lawsuit asks for various injunctions against various administration officials and congressional Republicans. These requested injunctions would, among other things, force the powers that be to accept D.C.’s delegate as a full-voting member of the House and force the Senate to accept any theoretical senators chosen by D.C. residents in the future.