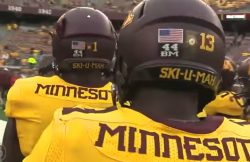 The University of Minnesota’s football team might sit out the December 27 Holiday Bowl after 10 players got suspended over a gangrape allegation. They haven’t practiced since Thursday, and they insist that will continue until things change.

“The boycott will remain in effect until due process is followed and the suspensions for all 10 players involved are lifted,” Senior Drew Wolitarsky said in a statement. He was accompanied by the team as well as the 10 players suspended for their connected to a reported rape.

The School’s Equal Opportunity Affirmative Action (EOAA) recommended disciplinary action for each of the players, the team’s lawyer said according to The Star Tribune. Ray Buford, Carlton Djam, KiAnte Hardin, Dior Johnson, and Tamarion Johnson might get expelled. Four more—Seth Green, Kobe McCrary, Mark Williams, and Antoine Winfield Jr.—face possible year-long suspensions. Meanwhile, Antonio Shenault could get probation. All 10 have been implicated one way or another in a reported gangrape after the September 1 season opener. As things stand, they each remain on indefinite suspension.

The Hennepin County attorney’s office declined to press charges in October, but University of Minnesota officials can investigate sexual assault claims even if a police inquiry goes nowhere. That’s what’s got the team angry. School officials only need a “preponderance of the evidence” as the standard of proof. In other words, what’s more likely? That the incident happened, or that it didn’t? School investigators thought the former.

According to a police report obtained by the Tribune, the woman said it happened when Djam brought her to his apartment after she drank five or six shots of vodka. They began having sex, though she reportedly didn’t know how the sex acts started. Then other men got involved. She said at least a dozen.

“I was shoving people off of me,” she said. “They kept ignoring my pleas for help. Anything I said they laughed. They tried to cheer people on.”

She reported it the next day after encouragement from her mother. Police say they interviewed Djam, who handed over apparent video of the incident. He insisted that it was consensual. Four other players said likewise, and one investigator, Matthew Wente, sent a report on September 30 that there was no evidence in the videos that she was “in distress” or that the incident was “nonconsensual.”

Things petered off after the woman filed a restraining order against six players. Attorney Lee Hutton appealed the orders, and this ended up in a settlement. The players have to stay at least 20 feet away from her and have no contact. Meanwhile, neither side could file a lawsuit.

We’ve reached out to Hutton, the lawyer for all 10 players, about his plans to appeal school’s actions.