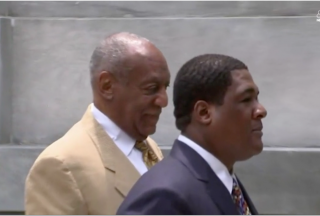 Bill Cosby‘s attorneys lost a last ditch effort to get his charges thrown out.  In a Pennsylvania courtroom on Thursday, Cosby’s legal team attempted to get his case dismissed or force his accuser to testify in a pretrial hearing.  Cosby’s habeas corpus petition argued that Cosby should have had the opportunity to cross examine accuser Andrea Constand during a preliminary hearing. A judge denied Cosby’s petitioned and ruled that prosecutors can use hearsay at a preliminary hearing, which means the case will go to trial.

“This is a very difficult call,” the judge said during the proceeding. LawNewz.com editor and attorney Elura Nanos is at the Montgomery County Courthouse, she filed this report for us.