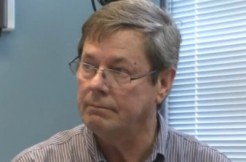 A Fox reporter in Missouri is in trouble after making a bullet-themed joke about Michael Brown’s mother.

“She’s going to talk about the new lead diet she’s endorsed,” Fox 2 reporter Bobby Hughes wrote in a now-deleted July 22 post about Lesley McSpadden, according to The St. Louis American. “Five servings and you can lose 200 lbs in two years easily.”

Now the Ethical Society of Police, a union for black cops in St. Louis, demands an apology.

“The reference to ‘lead,’ the loss of ‘200 lbs in two years,’ and other words in this statement are a clear reference to Michael Brown being shot and killed by Officer Darren Wilson in 2014,” according to a statement obtained by The American. Sgt. Heather Taylor, the union’s president, is demanding the reporter resign.

Hughes’s post was a response to news that McSpadden was scheduled to appear on stage at the Democratic National Convention.

Her son, 18-year-old Michael Brown, an African-American, was shot and killed by police officer Darren Wilson in Ferguson, Missouri on August 9, 2014. Brown apparently met the description of a robbery suspect. His death sparked protests, with Ferguson becoming a focal point for debates about police misconduct. A St. Louis County grand jury decided not to indict Wilson.

Hughes sent this apology to the Ethical Society, The American reports:

I would like to apologize for the hurtful posts I recently made on my Facebook page. I specifically want to tell Michael Brown’s family how very sorry I am. As a parent, I can’t imagine losing a child and what I wrote was incredibly insensitive considering all that Mrs. Lezley McSpadden has been through. My two inappropriate posts are by no means a reflection of the views at KTVI/KPLR. They are a news organization that prides itself on being fair. I on the other hand was anything but fair – and for that I am deeply sorry.

We’ve reached out to Fox 2 and will update if we hear back.

[Screengrab of Hughes via Fox 2 News]

Fox 2 told Rebecca Rivas of the St. Louis Post-Dispatch that Hughes is no longer with the station.

Fox 2 just called to confirm that Bobby Hughes was "no longer employed by the station." And that's all she could say https://t.co/FDY0u8qGyQ

I asked the @FOX2now spokeswoman if she wanted my email in case the station issued a public apology. She said she doubted there would be.