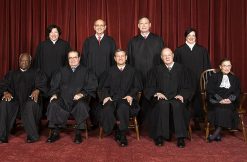 The U.S. Congress is many, sometimes unprintable, things. “Persistent” is one of them. Two congressmen on Thursday announced a bill that’d require the U.S. Supreme Court to televise open sessions unless the majority of justices think it would violate a parties’ due process.

Seems like a very easy bill to get passed. Co-sponsors Rep. Gerry Connolly (D-Virginia) and Rep. Ted Poe (R-Texas) are teaming up for some bipartisanship in spite of the current political climate. Poe, a former state judge, is also using his experience to tout the bill.

“I was one of the first judges in Texas to allow cameras in the courtroom,” he wrote in a joint statement. “It worked. A simple non-intrusive camera would allow for greater transparency and greater faith in the decisions made by the Federal Government. Lack of seating capacity is no reason to deny the public their right to view what goes on in the third branch of government.”

Oral arguments are only open to the public on a “first-come, first-seated basis,” and there is just room for a few dozen people. Audio is available online and at The National Archives and Records Administration.

Past attempts to introduce cameras have failed. They introduced similar legislation in 2015. And 2011. Rep. Steve King (R-New York) led another effort in 2013. Spoiler alert: None of these efforts succeeded. We’ve reached out to Connolly and Poe to learn what makes this attempt different from the others.

Not a single-justice is giving the idea full-throated support. Most have opposed it for years.

Ruth Bader Ginsberg said in a 1993 confirmation hearing that it would benefit the public but gave a caveat. “The concern is about distortion because of the editing if the editing is not controlled,” she said.

Clarence Thomas said in his 1991 confirmation hearing that he had no problems with it, but later changed his mind. Sonia Sotomayor and Elena Kagan also walked back their initial support of the idea. Stephen Breyer and Anthony Kennedy told Congress in 2013 that it would make justices self-conscious, interfering with work. The late Antonin Scalia famously opposed it. Samuel Alito and Chief Justice John Roberts are by no means an exception.

“There’s a concern about the impact of television on the functioning of the institution,” Roberts said at a 2006 conference. “We’re going to be very careful before we do anything that might have an adverse impact.”

Don’t expect many happy justices if Congress ever does require cameras in the courtroom.