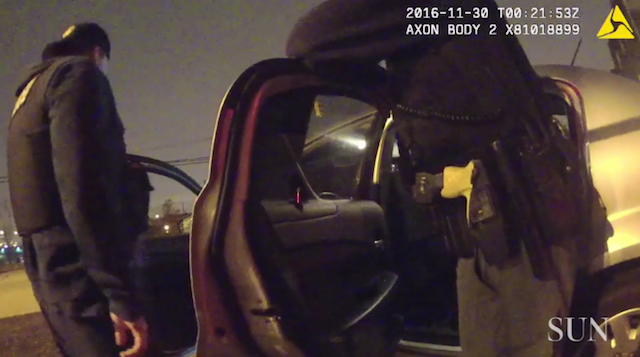 BALTIMORE (AP) — The Baltimore Police Department is having a tough time restoring public confidence in the troubled agency.

The city is on pace to break its decades-old murder record and the body camera program that was rolled out to increase transparency has fueled allegations of misconduct after a pair of problematic videos recently surfaced.

The videos come about two years after the death of a young black man in police custody thrust the department into turmoil and set off unrest throughout the city. Freddie Gray‘s death led to the firing of the police chief, a U.S. Justice Department investigation that found longstanding patterns of discrimination and abuse, and a court-enforceable order to change.

“We wouldn’t be under a consent decree if we didn’t have issues,” Police Commissioner Kevin Davis said earlier this year at a news conference announcing the federal indictment of seven gun squad officers. They had been caught on a wiretap working together to rob and illegally detain citizens. At least 39 cases involving the officers were dismissed, and prosecutor Marilyn Mosby agreed to review convictions in cases involving those officers dating back to 2015.

Since he was appointed in 2015, Davis has pledged his commitment to ridding the department of corruption, but has said the process will take time. “I’ve said on more than one occasion: Good cops hate to work with bad cops,” he said.

The allegations of wrongdoing keep coming. In late July, Baltimore State’s Attorney Marilyn Mosby announced that her office had dismissed 34 cases that relied almost exclusively on the testimony of one or more officers in a recently released bodycam video. That video shows an officer placing a bag of pills inside a soup can in an alley, then walking out to the street to meet two other officers. The first officer then turns around, walks back into the alley and picks up the bag.

Those officers are involved in about 120 cases in all, Mosby said.

Another bodycam video, recorded in November and released in early August by attorney Joshua Insley, shows an officer searching a car. Shortly after, a different officer searches the same vehicle and immediately finds a bag of drugs. Charges against the suspect were dropped in that case.

The internal affairs unit is investigating both bodycam incidents, and Davis urged the public not to jump to conclusions until the investigation is completed.

“Unfortunately, much like the position we were placed in with the seven federally indicted officers, my team of prosecutors has been working around the clock to ensure a thorough evaluation of each and every case,” Mosby said.

In response to the first video, Davis suggested the officers may have forgotten to turn on their body cameras and recreated the scene of officers finding drugs. He sent a letter reminding officers to always keep their body cameras switched on while responding to calls for service and during investigations. He also warned officers not to recreate discovering evidence.

Baltimore has also recorded 211 homicides this year, putting 2017 on track to break records for bloodshed. In 1993 there were 353 homicides, but the city had roughly 100,000 more residents than it does today.

The Baltimore Police Department has outfitted more than 1,500 officers with body cameras so far. The technology retains roughly 30 seconds of footage — but no sound — before the camera is switched on.

Debbie Levi of the Maryland Office of the Public Defender said in addition to the officer misconduct, prosecutors are failing to adequately review evidence before pursuing cases.

“Although we know there’s police misconduct deeply rooted in Baltimore, what we’re seeing in these cases is the state’s attorney’s office not responsibly reviewing evidence or making accurate charging decisions,” she said.

In a statement, police spokesman T.J. Smith said the department’s officers have recorded more than 110,000 hours of footage since the body camera program began.

“We have disciplined our police officers, counseled them, and trained them in accordance with best practices associated with this technology,” he said. “We remain committed to getting it right. Our relationship with the community depends on it.”

Levi said the disturbing footage is validating for some of her clients who have for years been saying that police had framed them.

“We hope the department will respond to complaints more aggressively and take people’s assertions more seriously,” she said. “Only time will tell, and it will take years before they rebuild the trust of the citizens of Baltimore.”

This article was written by Juliet Linderman of the AP.