Arrest Made in Brussels Investigation; Two Suicide Bombers Believed to be Brothers 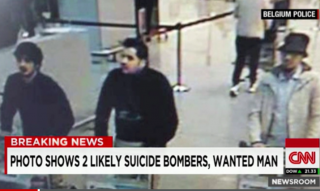 One person has been arrested after Tuesday’s terrorist attacks in Brussels, CNN reports, citing state broadcaster RTBF. Authorities apprehended the unnamed individual a day after bombings at an airport and metro station in Brussels killed dozens and injured hundreds. Authorities have confirmed that he is not the prime suspect, bomb maker Najim Laachraoui.

Two suicide bombers have been identified as Khalid and Brahim El Bakraoui, brothers who are believed to have killed themselves in the attacks, CNN learned from a source with Belgian security. They were already known to Belgian law enforcement for ties to organized crime, but not terrorism.

It is possible that the brothers were two of the people seen in an image from airport security footage, as Belgian federal prosecutor Frederic Van Leeuw said the men in dark clothing were suicide bombers. Brussels police said the person in custody is not the man in the light clothing, according to Fox News. That person’s identity is still unknown.