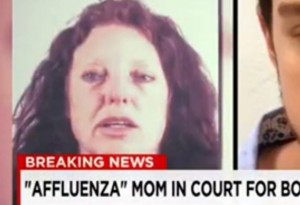 Tanya Couch faced a bail hearing Monday, but the ‘Affluenza’ mom said she didn’t have the money to pay her $1 million bail. So she wanted it lowered, and the judge agreed.

Couch had tried to help her son Ethan, 18, run after a video surfaced which apparently showed him drinking alcohol. That would have broken the terms of his 10-year probation, which he got for killing four people in a 2014 car wreck while intoxicated. Mother and son disappeared.

Mama Couch and Lil Couch popped up in Puerto Vallarta, a Mexican resort town where Ethan reportedly went to a strip club, and Tanya covered a tab he couldn’t pay. Ew. They were arrested in December by local cops, and though Ethan still fights extradition to the U.S., Tanya has to face charges.

It doesn’t take an expert to guess that her plea for mercy is problematic. But here’s expert lawyer Paul Callen talking to CNN before the judge reduced bail:

The prosecutor “established that the father has a lot of money,” Callen said, and through cross-examination in the hearing tried to convince the judge Tayna could get money this way. Plus, she already ran to Mexico, and well, has a proven history of being a flight risk.