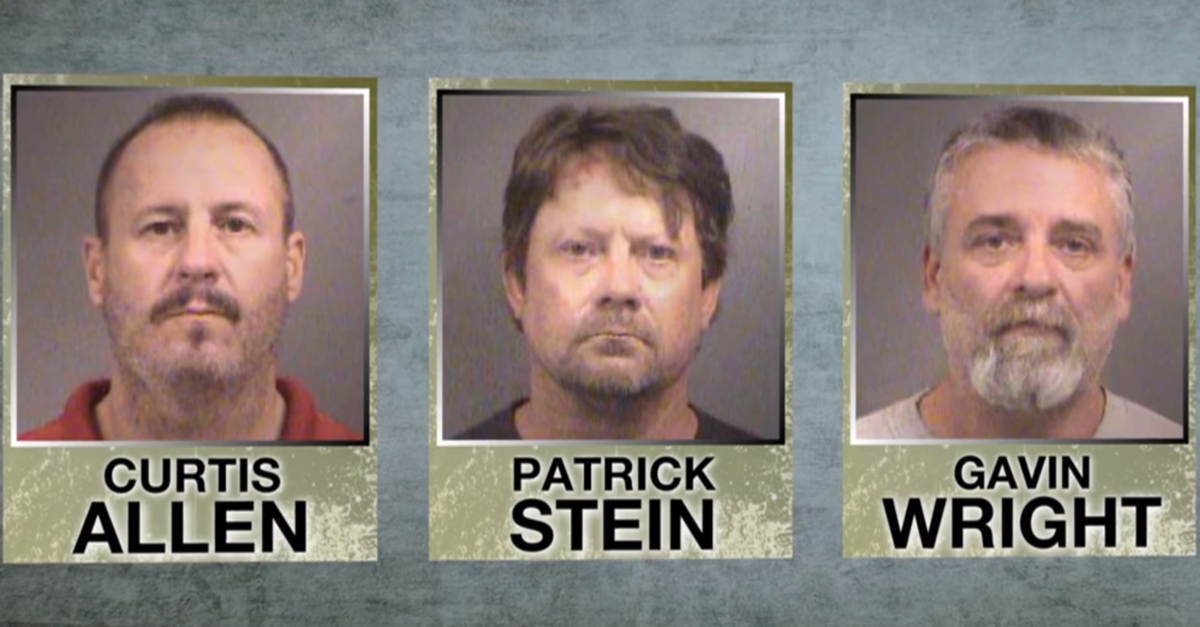 Three Kansas men were sentenced on Friday for plotting to set off bombs at an apartment complex housing Muslim immigrants, the Department of Justice announced. Curtis Allen is set to spend 25 years in prison for one count of conspiracy to use a weapon of mass destruction and one count of conspiracy to violate the housing rights. Patrick Stein will spend 30 years behind bars on the same charges. Gavin Wright was sentenced to 26 years on these counts, and also for lying to the FBI

They were convicted last April 18. The apartment complex housed Muslim immigrants from Somalia, and contained a mosque, prosecutors said. The trio, who belonged to a militia group called the “Crusaders,” planned on putting explosives in four vehicles parked at each corner of the complex.

Stein called the targets “cockroaches” on multiple occasions, authorities said. Here’s what he said on a June 2016 conference call, according to the criminal complaint:

The only fucking way this country’s ever going to get turned around is it will be a bloodbath and it will be a nasty, messy motherfucker. Unless a lot more people in this country wake up and smell the fucking coffee and decide they want this country back…we might be too late, if they do wake up…I think we can get it done. But it ain’t going to be nothing nice about it.

“The Department of Justice works every day to thwart terrorist threats to the United States,” said Acting Attorney General Matthew Whitaker. “The defendants in this case acted with clear premeditation in an attempt to kill innocent people on the basis of their religion and national origin. That’s not just illegal—it’s morally repugnant.  Today’s sentence is a significant victory against hate crimes and domestic terrorism, and I want to thank everyone who helped bring the defendants to justice—the dedicated professionals with the FBI, the United States Attorney’s Office in Kansas, the Civil Rights Division, the National Security Division, and our state and local law enforcement partners.  Law enforcement saved lives in this case.”

The defense argued the trio never intended on committing any crimes, and the First Amendment protected their discussions.