Michigan Man Convicted of Murder for Shooting 18-Year-Old Woman, Recording Himself Kicking Her Until She Died 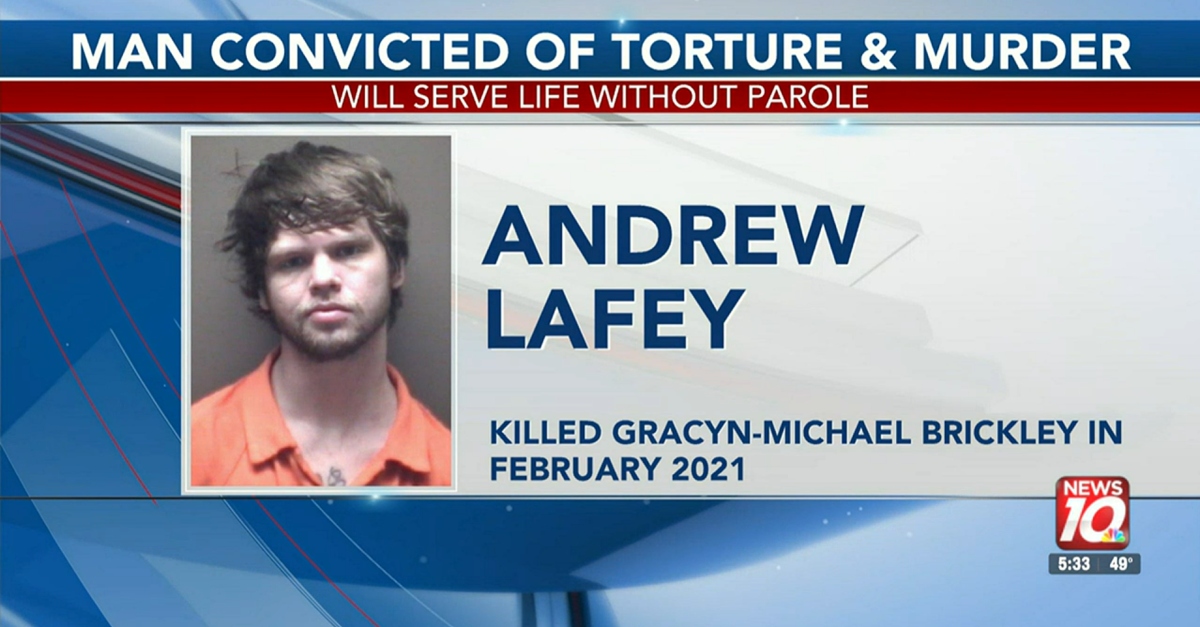 A Michigan man was convicted Friday for murdering a young woman. A judge agreed with prosecutors that Andrew John-Lawrence Lafey, 22, shot Gracyn-Michael Kay-Candace Brickley, 18, twice with a .22 rifle, then recorded himself for almost 11 minutes kicking her until she died, according to WILX and other local news outlets.

“The circumstances of Grace Brickley’s death were horrific,” Barry County Prosecutor Julie Nakfoor Pratt said in a statement obtained by the Lansing NBC affiliate. “The Defendant video taped himself stomping on and taunting Grace Brickley for close to 11 minutes. The torture seen in the video came after Lafey shot Grace Brickley twice and inflicted multiple injuries to her face and breaking her jaw.”

Lacey buried Brickley under the snow after the Feb. 16, 2021 murder in Maple Grove Township and went back inside a nearby home, where he showed the footage to his friends, prosecutors said. Those friends and his father reported him to police the following morning, authorities said.

“501 has a walk-in with a [name redacted] at his office, stating that an Andrew Lafey possibly shot a female with a .22 and buried her in the ditch sometime last night,” stated dispatch audio obtained by Grand Rapids television station WOOD in a Feb. 18, 2021 report.

The witness reportedly said he was shown footage of Lafey stomping on a woman’s chest.

“Apparently Andrew told his father this last night and they were trying to gather more information,” dispatch reportedly said.

Lafey was soon arrested at the home near where authorities say he killed Brickley. He often stayed there, authorities reportedly said.

Lafey opted for a bench trial instead of facing a jury. Judge Michael Schipper handed down the guilty verdict for one count each of first-degree murder, torture, and possession of a firearm by a felon, and three counts of felony firearm.

Sentencing is set for June 9.