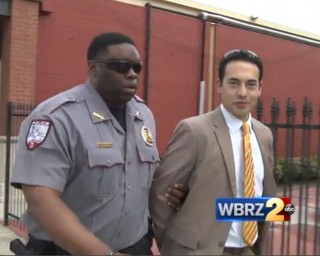 Local Louisiana investigative reporter Chris Nakamoto got cuffed after he went to a public building to obtain public records for his story on the local mayor’s salary. The whole incident was filmed by a WBRZ photographer.  Nakamoto took a trip to the White Castle city building because he says officials omitted information from his open records request. He was seeking records about the mayor’s sudden pay raise and wanted access to an audio recording of a city council meeting. After about 15 minutes of waiting around, the station reports an officer came out, and asked Nakamoto to leave. You have to read/watch what happened next:

Officer: I’m asking you to leave the premises.

Reporter: On what grounds. This is a public building, sir, we have a right to be here. I have a public records request..We’re not leaving

Sure enough, the reporter was handcuffed, and taken across the street to the White Castle police station. “This is what the residents of White Castle deal with,” Nakamoto said to the camera as he was being dragged off. The summons was written for a violation of statue 14:63 (remaining after being forbidden), according to WBRZ.

“WBRZ stands by Chief Investigator Chris Nakamoto. That’s first and foremost.  The public expects this news organization to ask tough questions and hold the powerful accountable.  Our reporters are not going to be intimidated by public officials when we are getting  you answers.  Station management is looking into all legal remedies regarding this incident.”

LawNewz.com called the White Castle police for comment, but haven’t heard back.