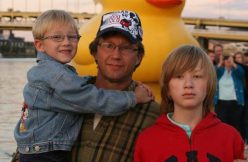 14-year-old Jacob Remaley is being charged as an adult in the deaths of his mother and little brother. Pennsylvania State Police say he shot and killed Dana Remaley and 8-year-old Caleb in their sleep using his father’s gun. Their bodies were discovered Wednesday at their home in New Stanton, Pennsylvania.

Jacob admitted to the killings, cops say. According to them, he said he wanted to kill his father too, but he’d already left for work. Jacob called 911 and allegedly tried to frame his dad.

Police don’t have specific answers for this, except to say that there were problems between him and his parents.