Someone Spray Painted ‘Kill Cops’ at the Baltimore Museum of Art 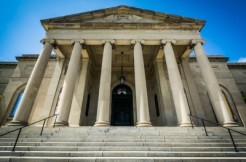 Police in Baltimore, Maryland said a female suspect spray painted ‘Kill Cops’ at the entrance of the Baltimore Museum of Art on Friday. Investigators told WBFF that they caught it all on surveillance video.

The words have been cleaned up.

Message was discovered on wall near an entrance Fri. morning. Police believe it was a random act.

“It’s a terrible situation,” said a museum spokesperson. “We hope police find whoever did this.”