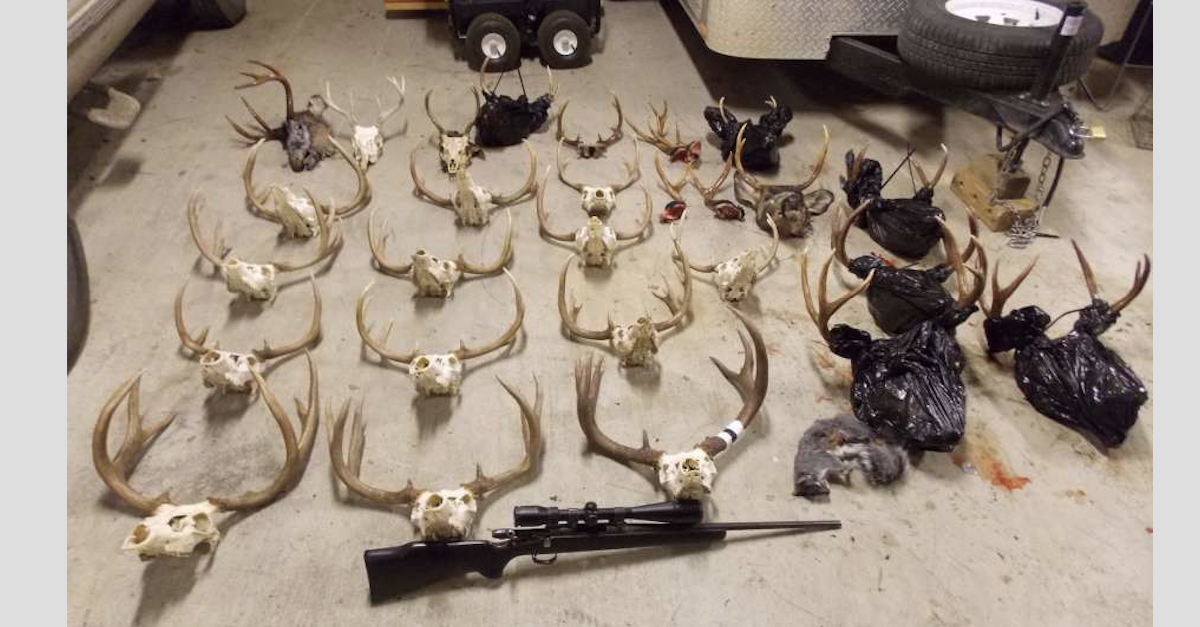 A group of hunters were hit with more than 100 charges by prosecutors in an investigation of a poaching ring which allegedly operated in Washington and Oregon and left dozens of animals dead and rotting.

For several years, state officials have noticed headless deer left behind in the Oregon wilderness. “Nearly every year, it seems we have deer showing up minus their heads at the end of seasons,” Craig Gunderson, a senior trooper with the Oregon State Patrol, told the Seattle Times.

Suspecting that it may be the work of poachers, stop-motion cameras were set up in the area near The Dalles, Oregon, and on the Washington state line as an attempt to catch the hunters in the act. Footage from the cameras yielded images of people in a truck shining a spotlight into the woods, an illegal technique used to find animals in the dark.  Left behind in the area where the truck was seen was another headless deer.

Days later, officers recognized the truck and pulled it over. William J. Haynes and Erik C. Martin, who were in the truck at the time, allegedly admitted to killing a deer. During the search of their homes, investigators say they found dozens of hunting trophies including the heads of 27 deer. During the investigation, officials searched the men’s phones and revealed hundreds of gory photographs and implicating messages.

“You ready to kill everything?!” one alleged poached texted another in the ring, investigators said.

Images of the poaching were also discovered, including videos of dogs running down and gnawing on bears, dead carcasses of elk, and even the hunters themselves, covered in animal blood.

Investigators were shocked about the gruesome discoveries. “Most people, when they kill an animal, there’s respect for everything. They take the hide, they take the meat and there’s something that’s respectful about it,” Jeff Wickersham, the Washington Department of Fish and Wildlife Captain said during an interview with FOX 12. “In this case, it’s all about the thrill. They’re going out there and killing to kill.”

Gunderson supported this, saying that for some people it was about “ego and bravado — who could kill the biggest, the most.” For others, he said, “it was kind of a demented social club.”

Between Washington and Oregon,  at least 17 people have been charged investigation, the Seattle Times reported. At least two have already pleaded guilty.

The charges included unlawful taking or possession of wildlife, waste of wildlife, hunting with an artificial light, use of dogs or bait to hunt, criminal conspiracy, aiding or sharing in a wildlife violation, and altering, borrowing or loaning a license, tag or permit. In Washington, crimes against wildlife may be felonies while in Oregon, they are misdemeanors.