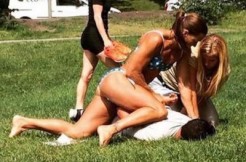 Mikaela Kellner doesn’t know what “off-duty” means. The Swedish cop was sunbathing with friends Wednesday in Stockholm, but that didn’t stop her from making an arrest, the news outlet Aftonbladet reports.

She said a homeless man tried to sell them newspapers, but he was pushy. A friend soon realized her phone was gone. Kellner, in a bikini, and another police officer chased down the man, and apprehended him. They found the phone.

Kellner, who has competed in the Swedish version of Ninja Warrior, had no problems making an arrest in her bikini. She said she would have even intervened even if she had been naked.