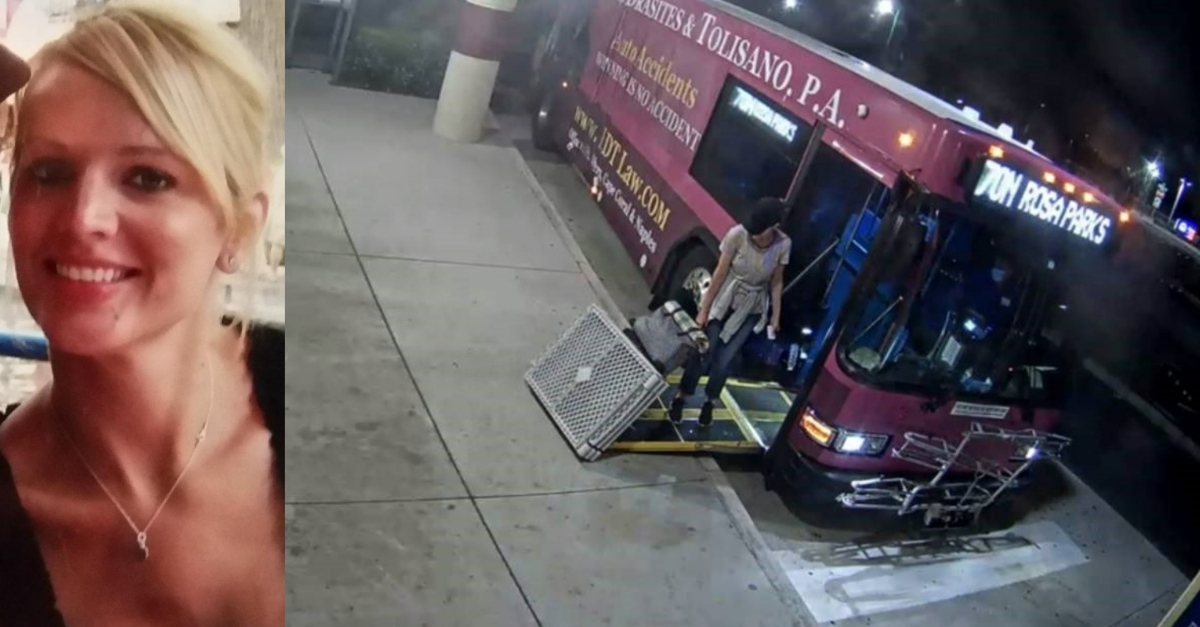 Police released new imagery of a woman leaving town on a bus days before her family reported her missing. Officers have released no information on foul play, but they voiced concern for Erica Ann Johnson, 36.

She “was missing but it was upgraded to missing endangered after an additional investigation,” CCPD Public Affairs Officer Brandon Sancho said, according to The Fort Myers Beach Observer in a Tuesday report. “No signs of foul play. She lives a different lifestyle where she has no phone, no vehicle, and no bank account. Investigators believe she left by bus and are currently working with LeeTran.”

Officers released new surveillance images last week, saying these show Johnson getting on a Greyhound bus in Fort Myers on July 8. According to cops, the transportation company said the bus was a nonstop trip to Tampa, Florida.

Authorities originally released a picture of Johnson with brown hair but a newly released image shows her with blonde hair. A friend said that Johnson worked as a housekeeper at Best Western Plus Beach Resort in the city of Fort Myers and had dyed her hair dark around the 4th of July, according to the Beach Observer.

“The additional photos include an updated photo of Ms. Johnson, family and co-workers [who] have stated that that her hair color is brown with blonde highlights,” cops said in their update. “The updated photo also shows as small freckle on the lower side of her face.”

UPDATED: 7/28/2022, Ms. Johnson boarded a Greyhound bus in Fort Myers on the morning of July 8th, 2022 which departed for Tampa. She was carrying bags, a travel pillow, and her bunny. According to Greyhound, the bus trip was nonstop to Tampa. https://t.co/UgUXlO0IEq

Please see the Missing Endangered below in reference to case number #22-016247. pic.twitter.com/2Q1CAjLl8x

Police have said that family reported Johnson missing on July 14.

“Based on new information ascertained during the investigation, Johnson’s status has been upgraded to a missing and endangered adult,” police said.

She was last seen in the area of Coronado Parkway and Cape Coral Parkway East in Cape Coral, cops previously said.

Her ex-husband said she skipped out on an appointment back in June to meet her children, according to cops in a WINK report. Johnson texted saying she had work. Nonetheless, missing out on seeing her children was reportedly unusual. On July 5, Johnson reportedly went to work, but said she did not feel well. A co-worker gave her a ride that afternoon to the bus stop at Bell Tower ships in south Fort Myers.

Family and friends love and miss Johnson, her mother said in a statement to the outlet.

“I would like to thank the people of Cape Coral & Fort Myers for their kindness and support in helping to locate Erica and the Cape Coral Police Department for their efforts over the past few weeks,” the mother reportedly said. “Erica is loved and missed by her family and friends who are devastated by her disappearance. We remain hopeful that she will be found safe very soon. If you have seen her, or have any information on her whereabouts, please contact the Cape Coral Police Department.”