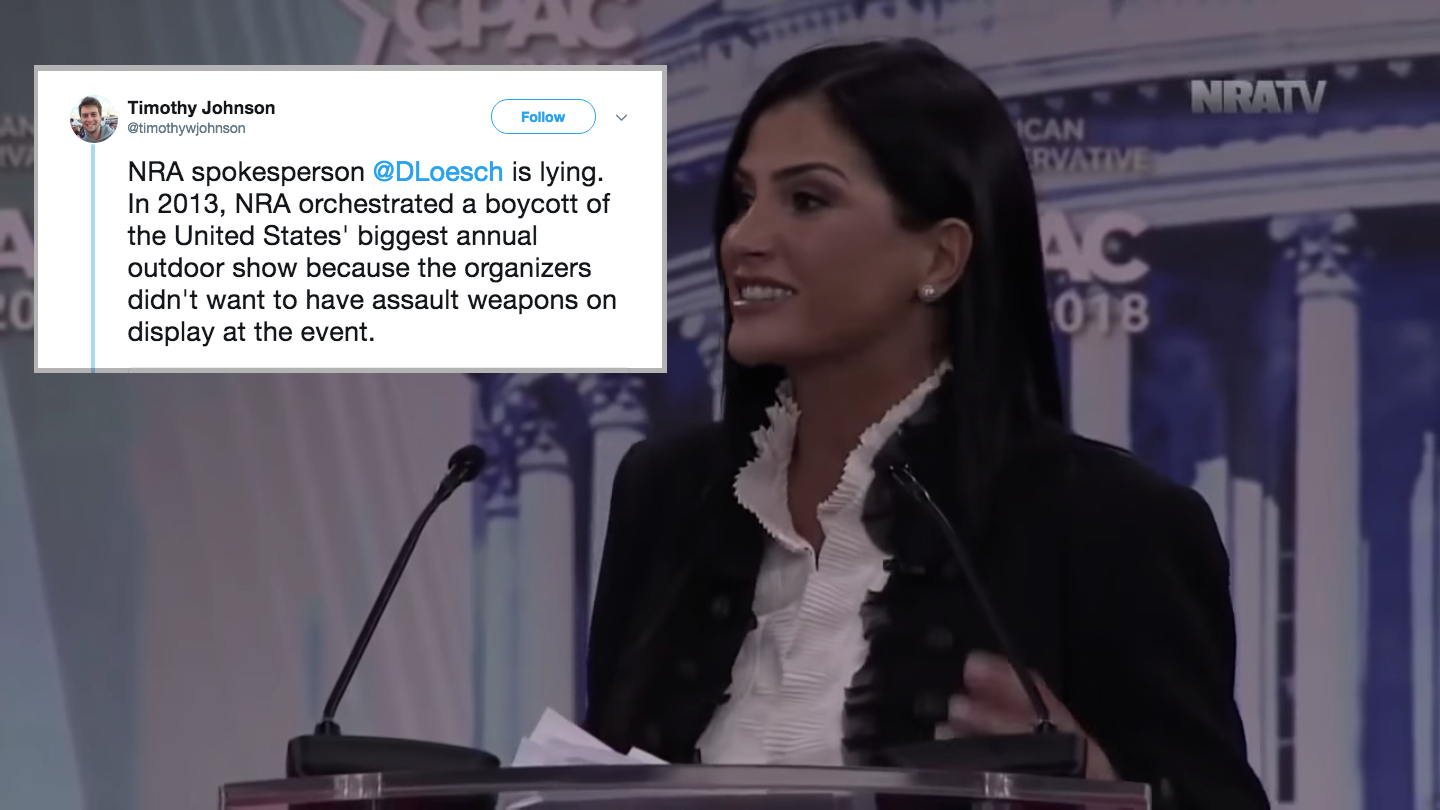 National Rifle Association (“NRA”) spokesperson Dana Loesch was slammed in viral fashion on Friday for suggesting the NRA doesn’t engage in boycotts. The NRA’s history of promoting boycotts, however, is long and well known.

Media Matters research fellow Timothy Johnson called out both Loesch and the NRA on Twitter by noting, “NRA spokesperson @DLoesch is lying. In 2013, NRA orchestrated a boycott of the United States’ biggest annual outdoor show because the organizers didn’t want to have assault weapons on display at the event.”

That NRA-led boycott was aimed at the Eastern Sports and Outdoor Show after organizers decided “to limit the sale or display of modern sporting rifles (also called ARs) at the event.”

The Washington Examiner, a conservative movement media outlet, credited the NRA with their boycott. An article from January 24, 2013 by Paul Bedard acclaimed the boycott’s strength and impact with the following lede, “A massive boycott backed by the NRA and outdoorsmen and women outraged that the nation’s largest outdoors show banned the exhibition of assault weapons has caused the show’s organizers to abruptly cancel the week-long event in Harrisburg, Pa.”

Here is the NRA bragging about it on its own website: pic.twitter.com/q4vxA9gSlf

Johnson later explained the upshot of the NRA’s boycott. He wrote, “To add insult to injury, after the NRA put this outdoor show out of business in 2013, it successfully bid on the event space and now hosts an assault-weapon-friendly show every spring.”

Other Twitter users were quick to pile onto Loesch’s statements by citing to additional NRA-engineered boycotts.

Commentator and activist John Graziano noted a 1991 NRA-led boycott against Sears, Roebuck and Company. This boycott and the ensuing controversy pressured Sears into destroying some 67,000 stuffed animals because a promotion in one of their catalogs would have resulted in Sears donating eight percent of each sale to one of the NRA’s biggest political foes: the Humane Society of the United States.

This article harshly denounces the Humane Society and contains a glowing reference to the success of the 1991 Sears boycott. The same article also approvingly cites to three additional NRA-led boycotts. Those boycott campaigns targeted: (1) ACE Hardware; (2) General Mills; and (3) Michelin–all over their support for the Humane Society.

Shopping @LLBean live on my radio show because some folks told me to boycott it. I hate boycotts. #DanaRadio #ObnoxiousSelfie pic.twitter.com/KQKFntU7Cb