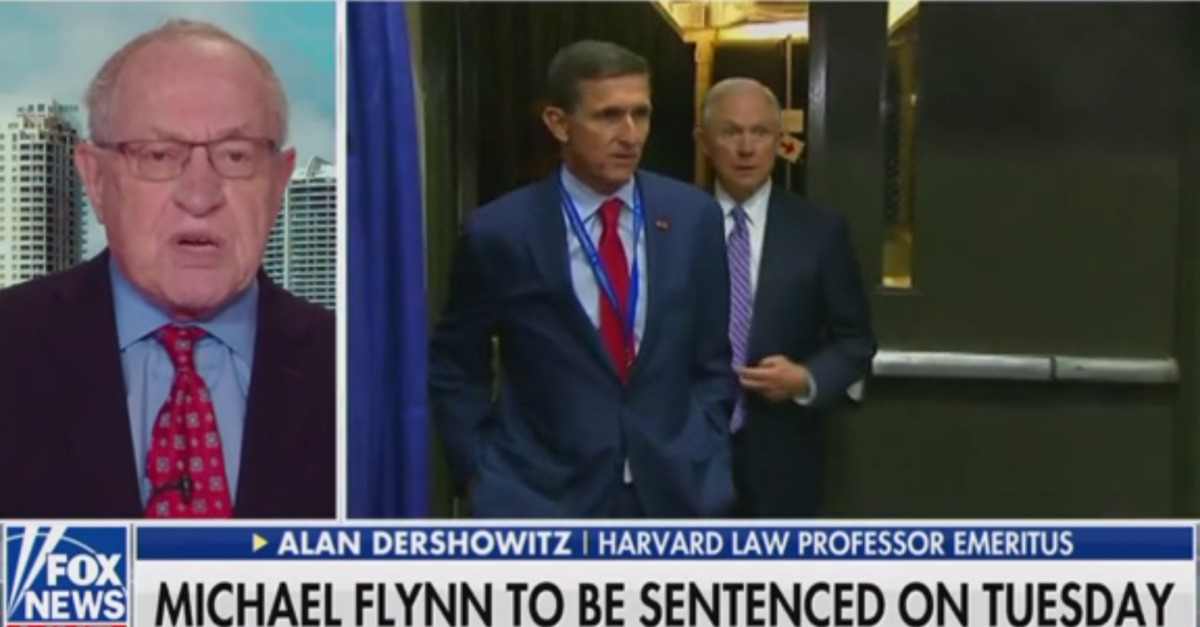 Harvard Law Professor Alan Dershowitz was heavily criticized on Twitter for defending former national security adviser Michael Flynn by saying that “lying to the FBI is not a crime.” Dershowitz thinks the criticism is off-base.

Dershowitz made the controversial statement while appearing on Fox News’ America’s Newsroom with Bill Hemmer on Monday morning.

“I hope the judge understands when he has the case tomorrow that Flynn did not commit a crime by lying,” Dershowitz told Hemmer. “Because the lie has to be material to the investigation. And if the FBI already knew the answer to the question and only asked him the question in order to give him an opportunity to lie, his answer–even if false–was not material to the investigation.”

Hemmer then attempted to get a word in edgewise, beginning to ask, “Which raises the question–” but Dershowitz continued on.

“Lying to the FBI is not a crime,” the law professor said.

“Here’s [Dershowitz] making an argument about how the law SHOULD be, but concealing it as an argument about what the law IS,” noted criminal defense attorney and legal blogger Ken White. “I agree with tightening the materiality standard for Section 1001. I don’t agree with going on TV and lying about it.”

“Dersh trying to claim that lying to the FBI about something they already know about somehow makes it not a crime literally defies logic and credulity,” wrote national security lawyer Bradley P. Moss. “The fact that they knew the truth was how they knew he was lying.”

“Dershowitz often misleads the public through sleight of hand like this,” he tweeted. His deceptive phrases are so carefully worded that I’m convinced he is deliberately deceiving people.”

After MoveOn’s Jordan Uhl posted a link to the video the commentary got even more brutal.

Filmmaker Nick Acosta posted a gif that seemed to sum up Twitter’s response:

Law&Crime reached out to Dershowitz for comment and clarity on his statement.

“What I said was lying to the [FBI] is not a crime unless the lie is material,” Dershowitz wrote in one an email. “Watch the segment. Read my Hill oped.”

Dershowitz then followed up with another email containing a link to the aforementioned article with the subject line: