The woman alleged to have stolen a laptop from House Speaker Nancy Pelosi’s office during the U.S. Capitol insurrection may have encouraged others to destroy evidence while released to her mother’s custody, prosecutors claimed in court on Monday.

Prosecutors previously alleged that Riley June Williams, 22, tried to delete her own social media trail to prevent her identification, but they now believe the cover-up continued after a federal judge in Pennsylvania authorized her release to home confinement.

“We were aware that she was deleting her own online accounts and possibly, switching devices,” an Assistant U.S. Attorney noted. “That was both in the original complaint and the amended complaint statement of facts.”

After U.S. Magistrate Judge Martin C. Carlson ordered her release less than a week ago,  prosecutors claim, Williams “instructed” alleged co-conspirators to do the same. The government is now requesting that the conditions of Williams’s release be altered to cut off her internet access and allow investigators to monitor her compliance with that prohibition.

The revelations might keep Williams on a shorter leash awaiting trial since her transfer from the Middle District of Pennsylvania to the District of D.C., where U.S. Magistrate Judge Zia Faruqui is presiding over her case.

Commenting on the “extremely troubling” allegations, Faruqui wondered why the government is not seeking Williams’s detention again. That question went unanswered before the hearing abruptly ended because of a defense counsel’s scheduling conflict.

In an alarming court documents, the FBI quoted a witness alleging that Williams intended to send the computer device to a friend in Russia, who then planned to sell the device to SVR, Russia’s foreign intelligence service.

“This matter remains under investigation,” it continues.

Williams is charged with trying to obstruct this probe, but her public defender Lori J. Ulrich claimed that her client was on the run from an abusive ex-boyfriend turned informant, not authorities. There has been no corroboration for this assertion, which was first reported by The Philadelphia Inquirer.

Like many of the Capitol rioters, Williams’s defense counsel also blames former President Donald Trump for her client’s actions.

Since her case’s transfer to Washington, D.C., Williams has a new public defender named A.J. Kramer, who had a schedule conflict that required adjourning the hearing early.

“At or about 20 minutes and 40 seconds into the video, there appears at the bottom of a staircase the subject, believed to be Williams, a Caucasian female wearing a green t-shirt and brown trench coat and carrying a black-and-white striped zebra-print bag over her shoulders,” the affidavit says. “She has brown shoulder length hair and wears eyeglasses. She is wearing a black face mask below her chin, around her neck. She can be heard in the video repeatedly yelling, ‘Upstairs, upstairs, upstairs,’ and can be seen physically directing other intruders to proceed up a staircase.” 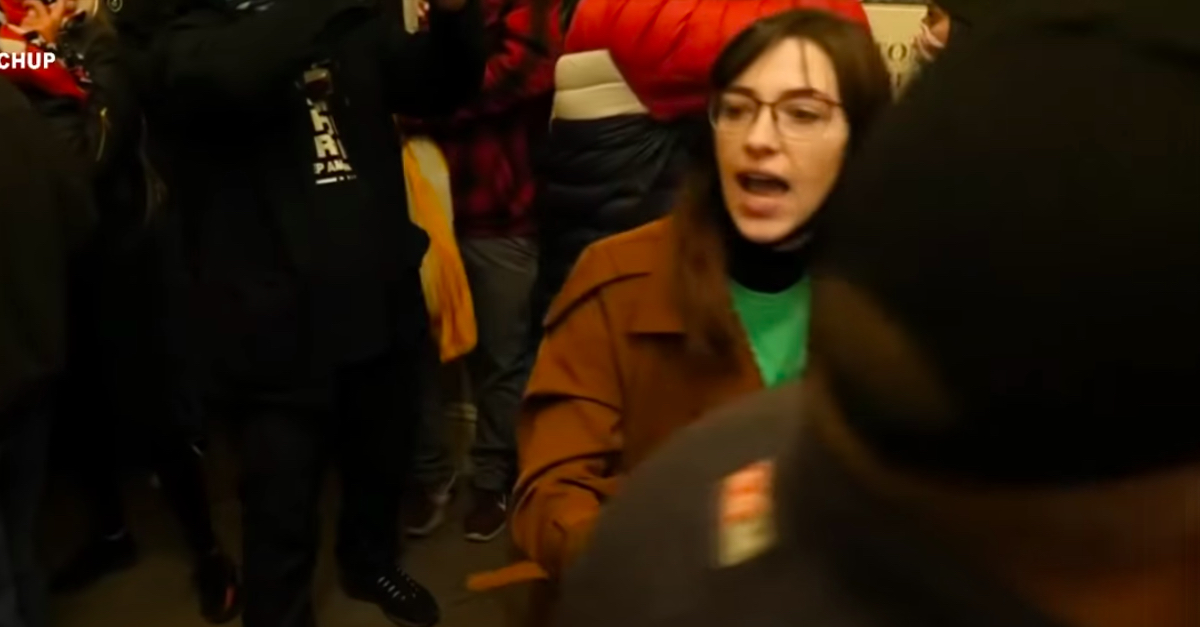 The staircase in that video indeed led to Pelosi’s office, authorities say.

The FBI learned of a second video from a witness on Jan. 18, nearly two weeks after the siege of Jan. 6.

“In one 4-second video, the person holding the cell phone camera is standing, angling the camera down toward a wooden desk with an ‘HP’ laptop,” the affidavit states. “A female voice that I believe to be Williams’ based on my review of the ITV YouTube video described above can be heard saying, ‘Dude, put on gloves.’ Next, what appears to be a man’s arm then reaches toward the laptop, with a black glove covering his hand, and begins to lift the laptop off the table. There is text across the video clip that reads: ‘they got the laptop.’ Given how loud Williams’ voice is, it seems likely that she was the one holding the cell phone camera.” 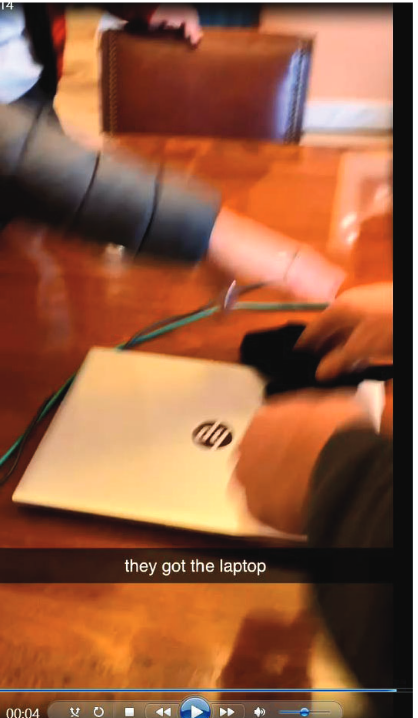 Capitol Police confirmed that an HP laptop was swiped from Pelosi’s office on that day, and Williams allegedly boasted about the heist on the social media platform Discord.

Williams will have a follow-up hearing on Tuesday, when the topic of her pre-trial release will be revisited.