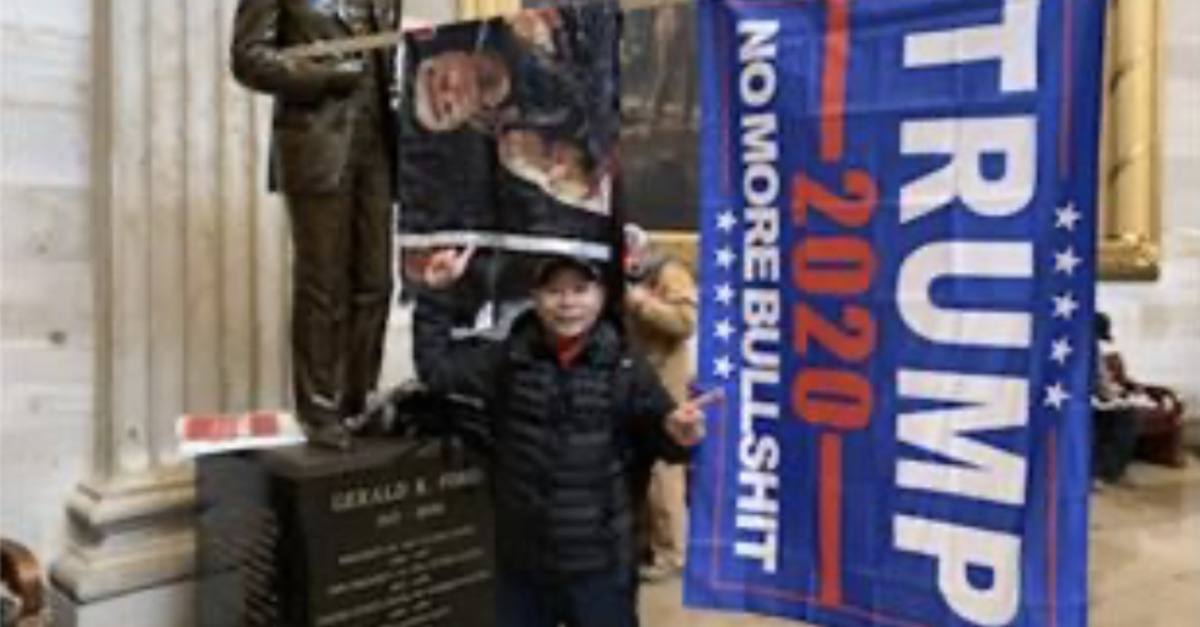 A former Houston Police Department (HPD) officer was charged with federal crimes on Tuesday after allegedly lying about his participation in the Jan. 6 siege of the U.S. Capitol Complex.

Eighteen-year (HPD) veteran Tam Dinh Pham was placed on administrative leave last week after allegedly participating in the pro-Trump attack. Pham resigned his position after his name was leaked to the press. Now, the newly-former cop is facing the prospect of prison time.

“Pham initially told [federal agents] he was in Washington, D.C. from January 5 – 7, 2021 for business reasons,” a statement of facts obtained by Law&Crime alleges. “He stated that he briefly attended President Trump’s rally on January 6, 2021 but initially denied going to the Capitol building.”

According to the Joint Terrorism Task Force (JTTF), Pham made additional efforts to conceal his alleged attendance at the Capitol riots prior to their arrival.

From that charging document:

Agents asked PHAM if they could look at the pictures on PHAM’s cell phone during the time he was in Washington, DC. PHAM agreed to show them the photos on his phone. As PHAM was showing [JTTF agents] the photos, they noticed there were no photos in the album for the dates that PHAM had traveled to Washington, DC. Special Agent Slaughter asked PHAM if she could go to his Deleted photo album. PHAM agreed, and in that album, there were pictures and videos that were readily identifiable as being of the interior of the Capitol building.

After that, the JTTF claims, Pham was advised “that it was unlawful for him to make false statements” and he then went on to admit his participation in some of the events that transpired at the national seat of legislative government.

“Pham stated that he climbed over some fences, which had been previously knocked over, and walked around some barricades,” the charging document goes on. “He stated he saw police officers, but he did not engage with them. Pham stated that he continued walking past a garden and a broken or torn down fence, and he passed other barricades on his way to the Capitol. Pham admitted to entering the Capitol building.”

Houston Police Chief Art Acevedo previously said Pham attended the pro-Trump rally before before he “penetrated” the Capitol with members of the pro-GOP mob last Wednesday.

“Acevedo said the officer is an Asian-American patrol officer with 18 years of service with the department and no previous disciplinary issues,” according to local NBC affiliate KPRC. “The chief said the man traveled alone to Washington.”

The @houstonpolice officer in question tendered his resignation this morning. The Department will release his name upon the conclusion of our joint ongoing criminal investigation with @FBI and @TheJusticeDept. https://t.co/5HlwgGuIJf

Acevedo announced the officer’s involvement during an afternoon press conference last week in response to a question from a reporter during the question-and-answer session as to whether HPD had passed along intelligence to other law enforcement agencies.

“I received a complaint,” Acevedo said. “I received information from an individual that one of my officers might have been in D.C. for the protest and may have participated in the attack on the Capitol.”

The police chief went on to say that he learned of the officer’s potential involvement “late Sunday” and that he “immediately” notified the FBI by way of the special agent in charge of receiving such information. A joint investigation between local and federal authorities under the JTTF banner quickly followed.

“This individual has actually been determined to have penetrated the Capitol,” Acevedo continued. “That person was placed on administrative leave [Wednesday] morning.”

The police chief said he verified the information by checking Pham’s Facebook to first confirm his identity and presence at the pro-Trump rally. Following the investigation and suspension, Pham was given 48-hour notice to attend a formal hearing last Friday.

“There’s a high probability this individual will face federal charges,” Acevedo said at the time. “And rightfully so. And I’d be surprised if they showed up Friday to my hearing.”

At least three other officers from various jurisdictions across the country have been charged in connection with Capitol attack so far.

“There were acts of heroism but next to that were acts of betrayal,” the Bronx-based democratic socialist said, adding that she was afraid “to run in [the] Capitol and not know if there is an officer there to help you or hurt you.”

“This marks the 28th cop known to attend the Trump rally as of this moment, but it was 26 two hours ago; the tally will probably increase,” freelance journalist Jon Ben-Menachem told Law&Crime last Wednesday–before former officer Pham was charged.

“The officer from Houston actually broke into the Capitol, unlike many other cop attendees,” Ben-Menachem continued, “if federal prosecutors charge him, he will likely become a scapegoat used to preserve police legitimacy.”

Ben-Menachem, whose work currently focuses on policing, is the creator of a real-time tracker at The Appeal which documents the dozens of law enforcement officers who took part in the pro-Trump rally preceding the U.S. Capitol siege on January 6.

To date, “The Cops at the Capitol” spreadsheet contains 32 members of law enforcement who have been identified by the media and/or their departments as having attended Trump’s “Stop the Steal” rally.

Pham, for his part, told JTTF agents that he only “looked at the historical art on the walls and took photographs and videos inside” of the Capitol Rotunda for some “10-15 minutes before he left, and that he did not return to the Capitol.”

From the FBI’s statement of facts

If convicted as charged, Pham faces at least two years in prison.

Read the full statement of facts below: