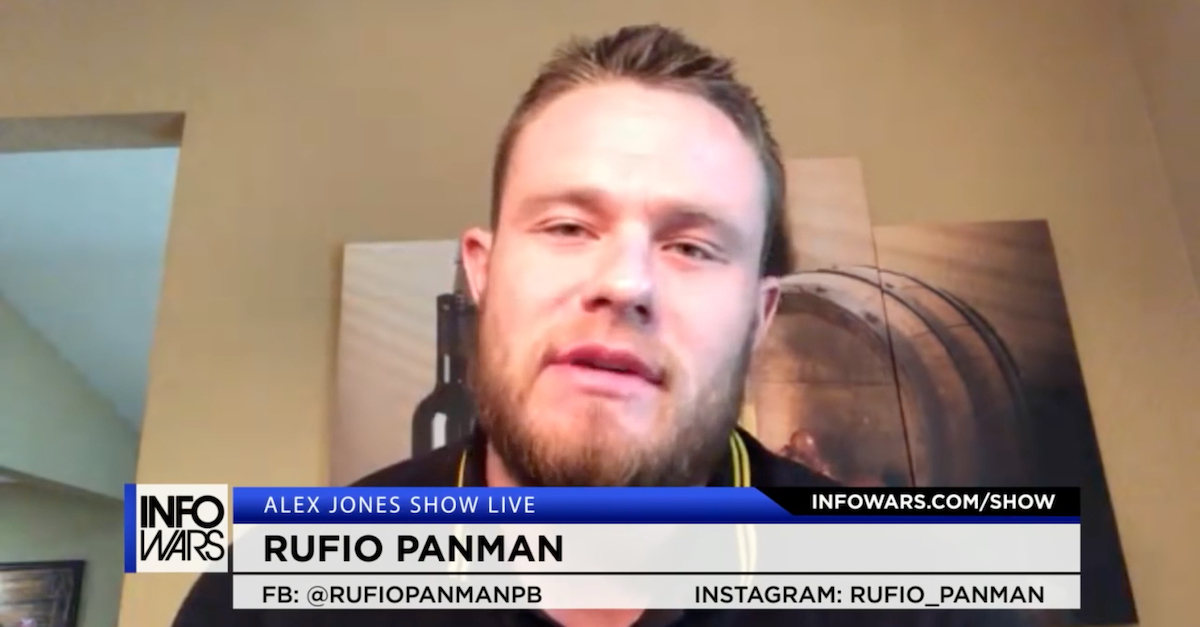 Ethan Nordean, the Seattle-area Proud Boys member also known as Rufio Panman to audiences on InfoWars with Alex Jones, is joining a chorus of complaints about defendants’ treatment behind bars as they await further proceedings on charges connected to the breach of the U.S. Capitol Complex on Jan. 6. Nordean, who is free on bond, says the alleged mistreatment of other inmates should be taken into account by a federal judge. Prosecutors are asking that judge to send Nordean back to jail as he awaits trial.

A three-page court filing by Nordean’s lawyers directly references a Politico report which claims guards at Washington, D.C.’s Correctional Treatment Facility have targeted Capitol breach defendants with alleged physical and verbal abuse. The accusations came to light when one Capitol siege defendant, Ronald Sandlin, told a judge this week that his fellow Jan. 6th defendants “are scared for their lives” behind bars.

Sandlin said Jan. 6 defendant Ryan Samsel “was severely beaten by correctional officers” and is now “blind in one eye, has a skull fracture, and detached retina.” He also alleged that racial tension existed between minority guards and the various white defendants, some of whom are alleged or admitted white supremacists. Samsel’s attorney subsequently threatened litigation against the jail facility, the Politico report said.

Nordean’s attorneys piled on to the accusations in a April 8 court filing:

Undersigned counsel can add that these reports are consistent with what they have personally learned in connection with another Capitol protester defendant, who is not even included in the above reporting. This defendant advised counsel that, during his pretrial detention at the D.C. facility, guards would flash lights in his eyes at night so that he could not sleep; that when he was held in solitary confinement for the duration of his stay, he was not given a shower and placed in a cell with a broken toilet; that when he asked for a shower, was handed baby wipes; that he was verbally threatened by guards on multiple occasions; and that guards would snap photographs of the defendant with their phones without his consent, which they appeared to be sharing with other parties through their phones.

It is unclear whether Nordean directly suffered any alleged harms while he was detained pending trial, but he is using the accusations in a legal strategy aimed at remaining free on bond. His argument, put simply, is that he fears being targeted because of his ties to an alleged white supremacist group if he is forced to return to jail. Federal prosecutors have consistently asked that Nordean be locked up; however, but for a brief emergency detention order, judges have thus far refused to acquiesce to those demands.

Federal prosecutors filed charges against Nordean on Feb. 2, and he was arrested on Feb. 3. Though a magistrate judge in Washington State ordered Nordean to be released from custody, a federal judge in Washington, D.C., ordered him detained and transported back to the capital to face trial on Feb. 8. Nordean’s attorneys continued to argue that he should be released from jail because, in their view, the charges against him were not supported by probable cause, the charges he faced did not constitute “crimes of violence,” and Nordean’s conduct wasn’t serious enough to warrant the degree and level of charges he faced.

“Nordean, 30, has no criminal history,” his defense attorneys argued on Feb. 23. “He has been gainfully employed in the Seattle area since his graduation from high school, where he has long and strong ties. The government’s argument here is merely that Nordean belongs to the Proud Boys group and should therefore be detained.”

Prosecutors countered that Nordean was a flight risk and that he needed to remain locked up to ensure the safety of the community.

Chief U.S. District Judge Beryl A. Howell on March 3rd agreed that Nordean could be released on a personal recognizance bond and ordered him to remain on home detention pending trial. He agreed to GPS monitoring, and the court docket makes reference to a “High Intensity Supervision Program.”

Indictments against Nordean were handed up on March 3rd and on March 10th. Prosecutors again moved to lock him up pending trial on March 20th. A judge said on March 23rd he could remain out on bond. A flurry of arguments from prosecutors and from Nordean’s defense attorneys continued to jockey the issue in the ensuing days and weeks.

A judge took the arguments “under advisement” on April 6th but allowed Nordean to remain out on bond.

His attorneys complained about his treatment behind bars to bolster their record should the judge ultimately issue a ruling on whether he should remain free pending trial or should be remanded into custody.